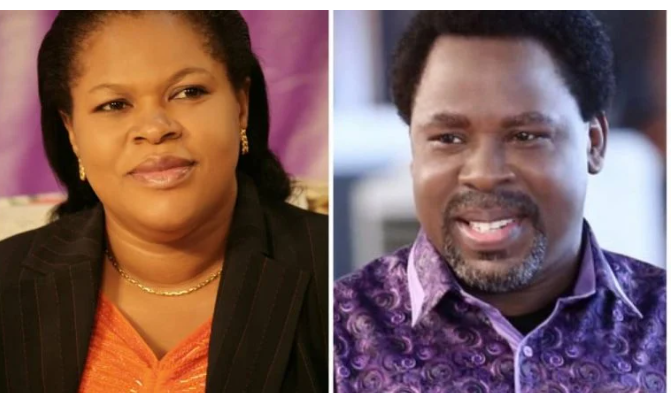 The wife of the founder of Synagogue Church of All Nations, T B Joshua, Evelyn, on Tuesday, said her husband shielded her from those who wanted to soil their name.

Evelyn made this known during his service of songs held today at SCOAN.

Naija News had earlier reported that the prophet died on Sunday, 7th of June after overseeing a church function.

SCOAN had earlier announced that July 5 to July 11, would be dedicated for a series of Joshua’s ‘laying to rest’ activities.

In a tribute, Joshua’s widow, Evelyn, said that her 31 years of marriage to the late prophet was not without trials.

“For gold to become gold, it must pass through the fire,” she said.

Evelyn said that her husband was dedicated to his ministry.

“You grew the church from an eight-member assembly sitting on a mat, to the ‘level we are today.

“You grew me to be the woman I am today.

“I stand here today to say thank you for choosing me, caring for me and nurturing me.

“Thank you for being a good father to the children, thank you for shielding me from those who were bent on soiling our lives; you were undeterred,” Evelyn said.

She said that her husband spent his life on things that would outlive him.
Evelyn said her husband’s death was peaceful, but regretted that he would no longer be seen on earth.

“It is, however, comforting that you have gone home after service; sleep on my beloved. Sleep on my God’s general,” she said.