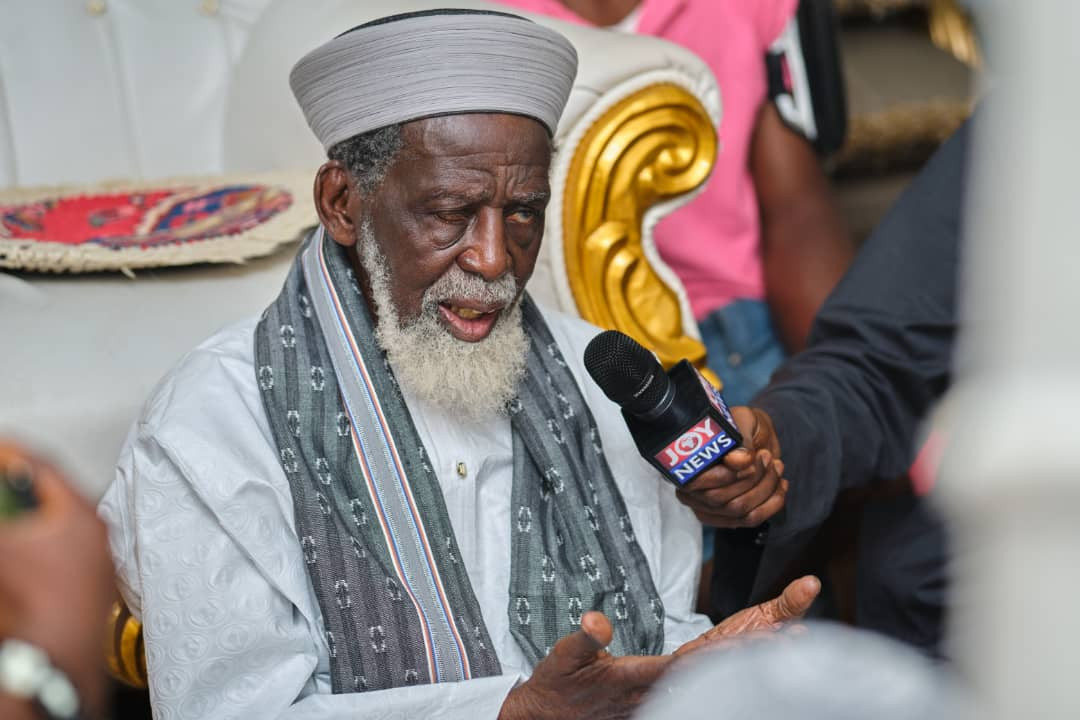 A renowned Islamic scholar in Ghana, Sheikh Osman Sharubutu has condemned the promotion, agitation and practice of homosexuality among the Muslim faithful.

Speaking about controversies surrounding the acceptability of homosexuality in the country, the Chief Imam said if not well handled, the establishment of the act may soon become a threat to national security, erode the nation’s cultural and societal values.

The cleric in a long statement which copy was made available to newsmen urged concerned institutions and individuals add their voices in speaking up against the disturbing and condemnable act.

The opposition of the Muslim community on the practice of homosexuality in the country is described as non-negotiable in the 9-page paper signed by Dr. Mohammed Marzuq Abubakari Azindo, the Personal Assistant to Sharabutu who happens to be the National Chief Imam of Ghana.

The cleric stated categorically that though the Islam community is committed to the secular ideals in the governance of the country, homosexuality is however a deviant behaviour totally unacceptable in Islam.

Sharabutu’s 9-page paper titled ‘THE POSITION OF THE MUSLIM COMMUNITY ON HOMOSEXUALITY IN GHANA’ reads in full;

“Homosexuality has, in recent times, become an issue of national concern and discourse. Indeed, it is currently a matter of disagreement between religious bodies and secular thinkers in Ghana. Even in the secular community, homosexuality continues to be a source of seeming friction between criminal justice and democratic constitutionalism. For instance, while Ghana’s Criminal Code outlaws homosexuality as a misdemeanour, human rights activists and democratic advocates argue that the Act that criminalizes it is unconstitutional. In their opinion, criminalization of the practice violates Article 17 of the 1992 Constitution which frowns on discrimination against persons ‘on grounds of gender, race, colour, ethnic origin, religion, creed, social or economic status. Besides, there is a tendency among the proponents of homosexuality to make it acceptable in the name of fairness and tolerance. On the contrary, some of the opponents, given the opportunity, would suggest summary execution of those engaging in homosexual behaviour. This confusing trend, if not well managed, can threaten national security and erode our cultural and societal values. We, therefore, add our voice to the efforts of other concerned institutions and individuals to find an amicable solution to the issue.

Background Information: For better comprehension, we preface our suggestions to develop an effective way of addressing this sensitive and critical issue with some background information.

“Available literature indicates that early opposition to homosexuality was based on the argument that the behaviour was unnatural. Opponents contended that sodomy could not lead to reproduction, one of the main natural results of sexual relations. To counter such arguments, homosexual researchers scoured the earth until they found a supposed homosexual behaviour in the animal kingdom.

“They claimed that the males of some species of exotic fishes off the coast of Japan imitated the behaviour of females of the species in order to prevent other males from impregnating their mates. They further argued that some rare butterflies from islands off the coast of Africa also had males exhibiting female behaviour during mating season. However, if the animal kingdom is to be used to justify human behaviour, we are sorry to state that the descent can never accept the behaviour. In contemporary times, genetics has become the most commonly used foundation for the pro-gay argument. In 1993 Dr. Dean Hamer, a researcher at the National Cancer Institute, claimed to have discovered “the first concrete evidence that ‘gay genes’ really do exist.” Homosexual orientation was supposedly transmitted to males on the X chromosome from the mother. Hamer’s findings, published in the prestigious journal ‘Science’, transformed his career as a government scientist to a dynamic media personality, and he penned his memoirs. He gave expert testimony to the Colorado Supreme Court that formed the basis of the victorious decision striking down anti-gay propositions.”

“However, a replication of his study at the University of Western Ontario failed to find any linkage whatsoever between the X chromosome and sexual orientation. It was also found that Hamer’s study lacked a control group, a fundamental principle of scientific research.

“Furthermore, in June 1994, the Chicago Tribune reported that a junior researcher in Hamer’s laboratory, who assisted in the gene mapping in the homosexuality study, alleged that Hamer selectively reported his data. She was then summarily dismissed from her post-doctoral fellowship in Hamer’s laboratory. But the National Institute of Health investigation substantiated her claims and gave her another position in a different laboratory.

Though Dr. Hamer hid his sexual choice in his memoirs, he later admitted in his lectures that he was a gay.

“Quranic Position on Homosexuality: There are several verses in the Quran referring to gay and lesbian behaviours. Some obviously deal with effeminate men and “masculine women.” Among these verses are the following:

“We also sent Lut : He said to his people : “Do ye commit lewdness such as no people in creation (ever) committed before you? For ye practice your lusts on men in preference to women: Ye are indeed a people transgressing beyond bounds.” (Quran 7:80-81)

“What! Of all creatures do ye come unto the males, and leave the wives your Lord created for you? Nay, but ye are forward folk.” (Quran 26:165)

Lut is referred to as “Lot” in the Hebrew Scriptures. This passage is an apparent reference to the activities at Sodom and Gamorah, whose consequences are known to everybody. Also, Prophet Mohammed (PBUH) is reported to have said: “When a man mounts on another man, the throne of God shakes.” Semantically stretched, the word “MAN” in this context is not a masculine noun. It is rather a neuter with a collective sense in reference to humanity in general. This construction is in line with the Arabic linguistic principle in which masculine nouns and pronouns are used for constructions in reference to the entire human race, male and female. Therefore, the Hadith also means that when a woman mounts on another woman, the throne of God shakes. This simple analysis is to prove a point of lesbianism implied in the Hadith.

“For religious, cultural and secular reasons, many people may not agree with the Holy Quran and the Prophet of Islam. However, the consequence of HIV/AIDS is enough to prove that homosexuality is evil and dangerous to society. The early spread of AIDS was concentrated among the homosexual community. It later spread to the heterosexual and the so-called bisexual community through blood transfusions and intravenous drug usage. Its spread continues on rampage among the promiscuous heterosexuals.

“Secular Viewpoints: As revealed by the background information, homosexuality is not a new behaviour. It has existed among many cultures and people, but usually in fewer numbers and in secrecy. Unfortunately, increasing secularism and liberalism in contemporary global society have succeeded in making it a human right issue with funny theories ranging from genetic transformation to democratic choice.”

“In an attempt to polish their image, the homosexuals constitute very active and powerful lobby groups across the world. They have strong political and social ties and access to the elite of the global society. They promote their agenda through legislation, present themselves as victims of prejudice and discrimination, help to enact gender discrimination acts that legalize and secure full benefits for same gender marriage, and fund research to falsify genetic propensity to homosexuality. Arguably, the most effective milestone in the homosexual movement was the declaration, in 1976, by the American Psychiatric Association (APA) that homosexuality was no longer considered an illness, but was merely regarded as an orientation or a sexual variant. This made many people suspicious of the scientific community, which went against known scientific data and norms.

“Discussion: We as Muslims do state unequivocally that homosexuality is a deviant behaviour TOTALLY UNACCEPTABLE in Islam. Although our religion allows us latitude to ponder and reconsider some issues, homosexuality is certainly NOT one of them. In fact, the practice is clearly condemned by the Quran, the Prophet, and his progeny. This notwithstanding, we do not hate the homosexuals; rather we find their behaviour abhorable. The following points constitute the grounds of our position:

“God has created everything in pairs each endowed with physical and psychological characteristics to complement and complete each other. The Quran (4:1) indicates that human beings have been created from one living entity (nafs), which represents the origin of both the male and the female. The “mating” or “spousing” of male and female sexes is original in human nature, and out of this instinctive relationship the human race develops, continues and spreads. Between the two sexes a gravitating combination of love, tenderness, and care is engendered, so that each finds in the other completeness, tranquillity, and support (Quran 30:21). Having children and loving them represent another fulfilment of the human nature (Quran 42:49-50). It is through this spousal complementation and completion, according to the Quran (7:189), that each spouse achieves comfort and enjoys peace of mind, satisfaction, and fulfilment. These relationships extend beyond the physical and sexual contact to psychological and spiritual fulfilment.

“The blessings of this completeness are not ended by their accomplishment, but they continue and develop through bringing forth children, raising them, and providing the whole family with material, emotional, psychological, and moral needs. The pleasures of completion and procreation may well be extended and multiplied when one is granted grandchildren, who not only represent genealogical continuation but also constitute a dynamic revitalization of the human race.

“If there is any truth in the claim that male homosexual behaviour could be genetic, what about bisexuals and lesbians? Surely, they are making a choice, which is, by our standards, a wrong one. Even if the argument of genetic inclination towards homosexuality is considered, it is the nobility of the human spirit that can overcome the behaviour. There are suggestions that alcoholics are genetically pre-disposed to their behaviour. Furthermore, some people are inherently prone to take risks, a behaviour, which is an essential element of human progress and development. This pre-disposition to risk taking behaviour can easily lead to the destructive practice of gambling. We do not encourage the people with the propensity to alcoholism or gambling to keep on indulging in these vices, but encourage them to resist and overcome the vices. Can’t we do the same with homosexual feelings and tendencies?

“Whether one has the orientation or harbours “homosexual genes,” one’s feelings and desires cannot dictate behaviour. As an illustration, one may have a strong urge to have a homosexual contact, or even a heterosexual contact with another person’s spouse, or to steal or kill. The nobility of the human spirit is to resist, and this elevates the human being to the status above that of the angels. It is indeed a distinguishing feature between humanism and animalism.

“The reality of our society requires that we argue our positions and use existing societal rationales to deal with issues, as they prevail. While we abhor acts of discrimination against individuals or groups, we also place a high value on discretion. The individual’s right of choice is a fundamental value and necessary condition for each individual to be accountable to God for his/her own actions. God’s guidance secures the balance between the rights of individuals and those of society. There is a continual struggle to maintain the balance between an individual’s right and society’s wellbeing. We place a higher value on the society’s wellbeing than on an individual’s right to actively promote counter-values that will ultimately damage the society at large. We, therefore, have a right to resist and ensure the protection of our values against any form of onslaught. This resistance should not be misconstrued as an aggression against any individual or group, but a firm and principled stand against the counter-values being promoted in the name of democracy and human rights. We have, indeed, a duty to promote divine wisdom and values that will advance humanity in an atmosphere of unity in diversity.”

In another news, Boko Haram terrorist on Monday killed Nigerian soldiers with an explosives-laden vehicle which rammed into them during a clash in Yobe State, Naija News reports.