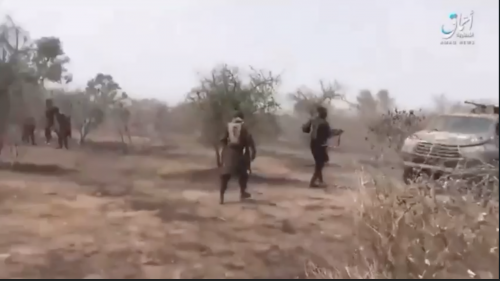 Boko Haram terrorist on Monday killed Nigerian soldiers with an explosives-laden vehicle which rammed into them during a clash in Yobe State.

A military source that spoke with SaharaReporters noted that the bomber believed to be a member of the Islamic State West Africa Province (ISWAP) faction of the group, attacked the military convoy in Goniri, a border community between Yobe and Borno states.

It was also disclosed that the terrorist group also engaged the Nigerian troops in a shootout.

The military source said, “There was an SVBIED (Suicide Vehicle Borne Improvised Explosive Device) attack at Goniri yesterday, so many soldiers were killed and injured. The number of casualties is currently unknown.”

This is coming after Boko Haram terrorist group killed not less than five residents of the Internally Displaced Persons (IDPs) camp in the Damboa Local Government Area of Borno State.

According to sources quoted in the report, eight persons had left the IDP camp on Sunday in search of firewood but were believed to have been attacked when they didn’t return in good time.

This prompted officials to declare them missing and Vigilantes embarked on a search and rescue mission to bring them back.

One of the Vigilantes identified as Abu Damboa told Daily Trust that he and his colleagues embarked on the search mission only to discover the lifeless bodies of five of those who left the IDP camp.

The whereabouts of three others are still unknown.