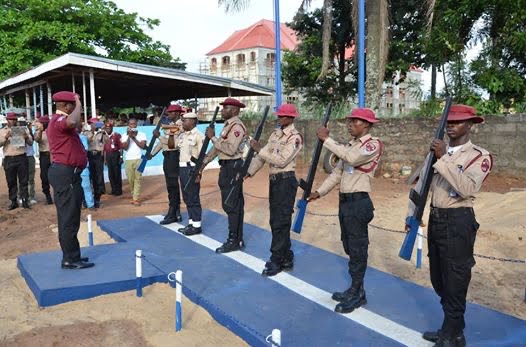 Many Nigerians have been angry on social media, especially on Twitter, following the report that guns would be handed over to officials of the Federal Road Safety Commission.

Naija News had earlier reported that the chairman of the FRSC in the House of Representatives, Akinfolarin Mayowa, as saying that it was necessary to ensure law and order.

He made the remarks as the commission appeared before the National Assembly committee to defend its 2021 budget.

He said the committee would sit down with the Secretary to the Government of the Federation, Boss Mustapha on the issue, and write a letter to Nigerian President Muhammadu Buhari to implement the request.

What are Nigerians saying?

The move comes as the country recovers from clashes between security forces and protesters calling for an end to the SARS unit of the Nigeria police force.

Many locals on social media are of the opinion that this attempt to give firearms officers an indirect return to the SARS force.

The issue has been discussed on Twitter since yesterday, here are the views and opinion of some Nigerians:

Omo FRSC want to be SARS in disguise, they should give them kondo if they need to be armed.

I doubt you can see it how I see it….FRSC is just taking the position of SARS with style

Do not give Road Safety (FRSC) officers guns, let them continue their services the way they've been doing all these years, unless you're planning on sending them to Sambisa, gun will only bring unnecessary killings, just like SARS did. pic.twitter.com/3dP9UtnDtR

Lol I laugh in "redeployment of SARS officials"

FRSC to bear arms, Another SARS is loading….?? pic.twitter.com/d7xGkVAZor

The FRSC chairman also said that FRSC officials have been harassed by drivers.

According to him, they are afraid of unarmed drivers, which is why they want to keep their guns.

He stated that giving arms to FRSC operatives would also stop roadusers from threatening personnel on duty.

NCDC Reveals Cause Of Strange Illness, Deaths In Delta, Enugu

#EndSARS: We Would Resist Any Form Of Protest – IGP Warns As #EndSARS Protesters Assemble Again