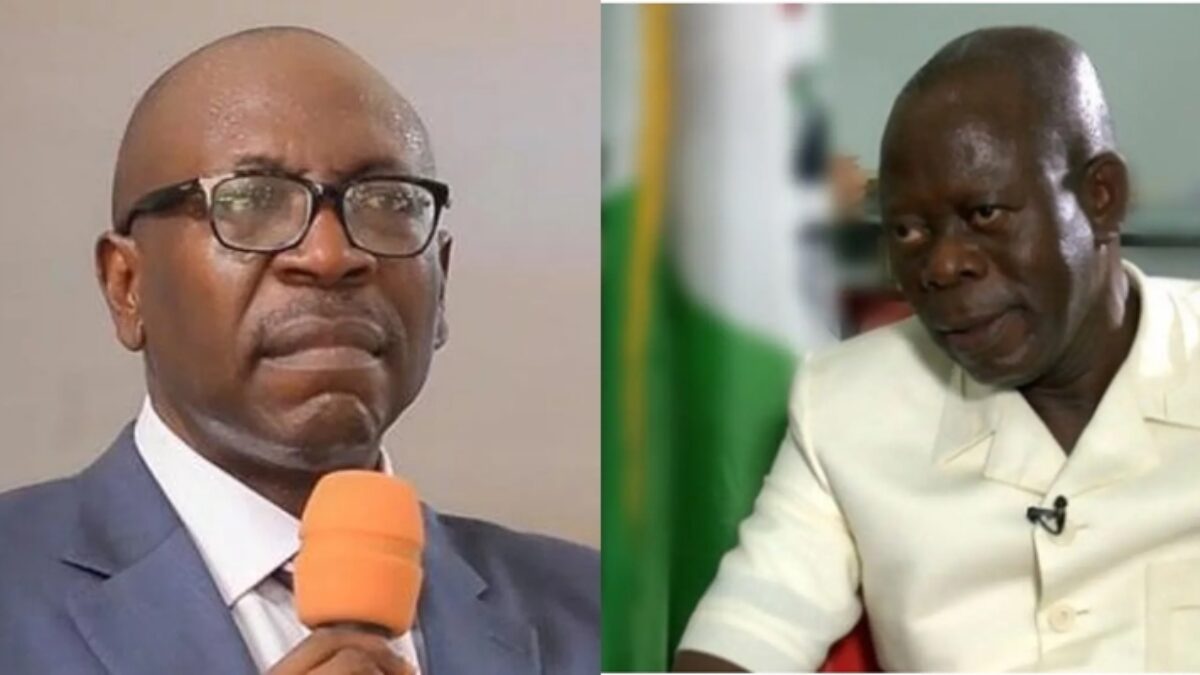 The name of Adams Oshiomhole was conspicuously missing in the acknowledgment list seen in a recently released statement by Pastor Osagie Ize-Iyamu, the APC candidate in the 2020 Edo State governorship election.

Iyamu while acknowledging party elders and supporters for their various roles before, during, and after the Edo governorship polls, failed to mention the name of Oshiomhole, former National Chairman of the All Progressives Congress (APC).

It is however understood that Oshiomhole played a prominent role in handpicking Ize-Iyamu as the party’s candidate, supported him, and also featured prominently during the campaigns.

But Ize-Iyamu lost out in his bid to become Edo State Governor, suffering defeat at the September 19 polls after getting 223,619 votes with Godwin Obaseki, the incumbent governor and candidate of the Peoples Democratic Party (PDP) scoring 307,955 votes to emerge the winner.

Speaking in a statement where he declared that he would not be challenging the results of the election at the tribunal, Ize-Iyamu singled out some party leaders for appreciation but Oshiomhole’s name wasn’t on the list.

The statement highlighted: “Let me once again whole heartedly thank the President and Commander – in- Chief of the Armed Forces, President Muhammad Buhari (GCFR), for his statesmanship and support throughout the election campaign.

“We also sincerely thank HRM Omo N’Oba N’Edo Uku Akpolokpolo, Oba Ewuare ll, the Oba of Benin; the Otaru of Auchi, Alhaji Aliru Momoh, Ikelebe lll, and our other Royal Fathers for their unceasing prayers for the peace of the state before, during and after the election”.

Obaseki stated this while speaking to newsmen during a thank-you visit to the National Working Committee of the Peoples Democratic Party (PDP) in Abuja on Monday.

The Edo governor stated that the fourteen lawmakers refused to be inaugurated and after 180 days their seats became vacant.

According to him, he lacks the power to inaugurate them because he did not ‘plant people into the house of Assembly.’