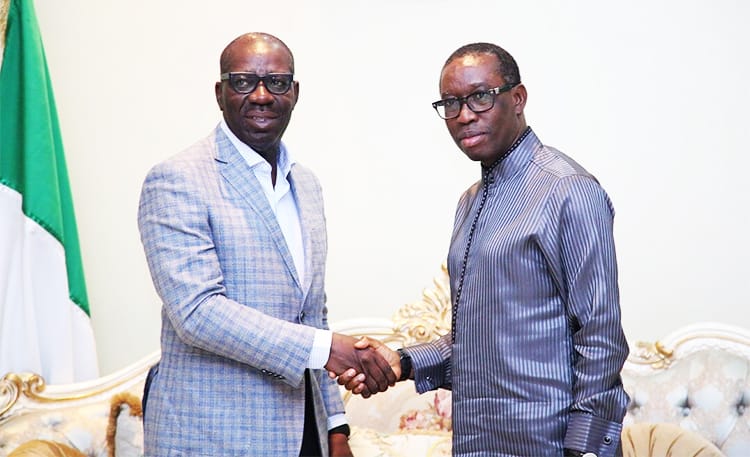 Governor Ifeanyi Okowa of Delta State, just like President Muhammadu Buhari, has admonished Governor Godwin Obaseki of Edo State to be magnanimous and graceful in victory.

During a “thank you” visit to the Delta State governor in Asaba on Wednesday, September 23, the governor felicitated with Obaseki who contested and won in the just concluded election in Edo State under the Peoples Democratic Party, PDP, urged him ‘not to allow the lions and the tigers to torment the people again’.

Naija News understands that Okowa’s statement was disclosed by the media unit of the Delta Government House, following Obaseki’s visit to the state a few moments ago.

Okowa expressed appreciation to God for the victory, saying that he was inspired to support Obaseki because of his humility and the fact that he was being oppressed. He said, “I want to congratulate you once again, and I feel very excited that you won the election.”

“I believe God did this in your life because you have proven to be a very humble man and people who boast too much don’t usually end well. I urge you to show lots of magnanimity and grace, but do not allow the lions and the tigers to torment the people again.”

Okowa prayed to God to give Obaseki the enabling grace to fulfil all his campaign promises to the people of Edo.

He added, “Your people are expecting a lot from you because of their huge support, and I pray that God assists you with more funds to provide for the needs of the people.

“I thank all our party members and the Edo people for their resilience in ensuring your re-election. Now that we are all in the same political party, it makes it easier for us to relate with ourselves in this region,” he said.

Meanwhile, the Aslem Ojezua-led faction of the All Progressives Congress, APC, in Edo State, has dispelled rumour that there are plans to expel the former National Chairman of the party, Adams Oshiomhole.