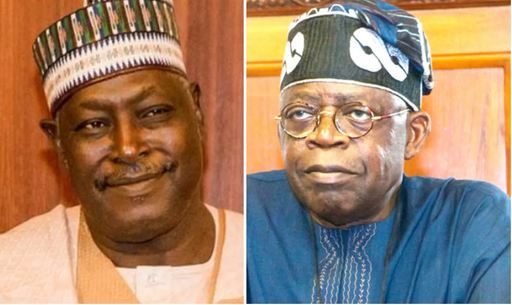 A former Secretary to the Government of the Federation (SGF), Babachir Lawal, says the National Leader of the ruling All Progressives Congress (APC), Bola Tinubu, must be given a chance to contest 2023 Presidency.

Naija News reports that Lawal who was sacked as SGF in October 2017 after he was indicted in N544m grass-cutting scandal, made this comment while speaking on the issue of zoning of the 2023 presidency in an interview with The Punch.

The former Secretary to the Government of the Federation said the APC must create an enabling environment for aspirants to contest for the presidency in 2023, adding that Tinubu was instrumental to President Muhammadu Buhari’s victory in 2015 and should be given a chance in 2023.

His words: “First of all, I want to declare that I am a Tinubu man. There’s no denying that there’s a Tinubu factor in the APC. Just like I was a Buharist and every time Buhari’s name was mentioned, I stood by it. But the crisis that started in the APC has nothing to do with 2023. It just had to do with the mismanagement of the party by those entrusted with that responsibility – namely the NWC,” Lawal said.

“One of our specific goals was to make Buhari the president. Tinubu was a colossus of south-west politics. If he had said there would be no merger, there wouldn’t have been any merger.

“By the time we went to the APC national convention, the north-west was not with Buhari. The north-west people were either for Atiku or Rabiu Kwankwaso; most of them, at least. The late Inuwa Abdulkadir and I continued to pile pressure on Tinubu, giving him the statistics.

“It became very clear that Buhari was going to win that primary election once Tinubu declared publicly his support for him and accepted that the south-west would vote for Buhari. Between Wednesday and Thursday (before the convention), it was clear Tinubu and Bisi Akande were going to support Buhari and the north-west had no choice but to support Buhari, otherwise, they were going to lose out.

“So if Tinubu had not conceded at that point, I think probably Kwakwanso would have won the presidential nomination of the APC. For that reason alone, you can see Tinubu’s contributions to the emergence of Buhari as president and his role in building the party.

“Therefore, except we want to bring the wrath of God on our heads, which we don’t want, the party must create an environment that is free and fair for anybody who wants to contest, including Tinubu, to do so. Allow the delegates, who must have emerged through a similarly free and fair process, decide who they want to vote for. It will be our duty as ‘Tinubu’s boys’ that time to say, ‘Let us vote for Bola’.”

Speaking further, the former SGF said Tinubu rallied funding for the campaign when Buhari had no money to fund his election and brought in an agency from the United States that branded Buhari’s image.

“Everybody knows Buhari had no money and he doesn’t play money politics. So he won his presidential primary election without spending money. Also, Buharists didn’t have money; they only had ideas, zeal and fanaticism. And politics requires money,” he said.

“Tinubu, who had his tentacles spread across the corporate world, was the only man who knew where and how to raise the funds needed. He was the one that reached out to all the ‘big men’ who were at the time scared of the then President Goodluck Jonathan.

“At the time, Nigerians saw Buhari as just a wood. He had no emotions. People weren’t seeing him as a loving husband and father and doubted if he could be humane. It was Tinubu who brought in consultants from the US – the firm behind the successful execution of President Barrack Obama’s campaign. It helped to repackage Buhari to Nigerians.

“That was when you started seeing Buhari wearing a suit, and in Igbo, Yoruba and Kanuri attire. The strategy was to transform his image and show a humane, loving and trustworthy person. It helped us.

“Tinubu doesn’t like to take credit for what he does; he lives for politics, gets his money from politics and spends it on politics. He has no other interest except politics. The monies he spent out of his pocket that is unaccounted for outside of the party’s campaign finances are quite enormous. I know this because he’s my friend and because I am also involved in the Buhari government.”