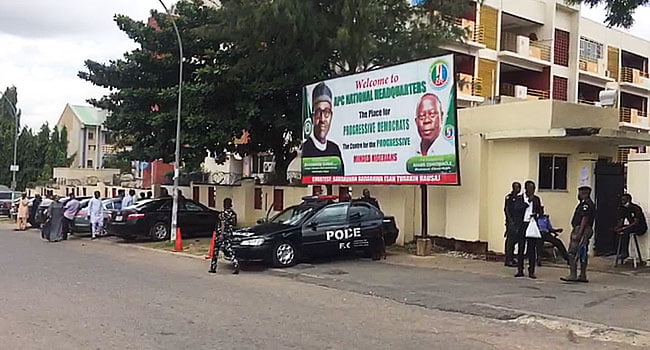 The men of the Nigeria Police Force (NPF) have unsealed the National Secretariat of the ruling All Progressives Congress (APC).

Naija News reports that the newly appointed Chairman of the APC Caretaker Committee and Convention Planning Committee, Mai Mala Buni, had visited the secretariat and exchanged pleasantries with members of staff.

Recall that President Muhammadu Buhari on Thursday called for the dissolution of the National Working Committee of the APC.

The president made the call in his opening speech at the National Executive Council (NEC) meeting of the party.

Following the NEC approval, Governor of Yobe State, Mai Mala Buni was appointed as the Chairman Caretaker/Extraordinary Convention Committee of the party. Other members include the Governors of Niger and Osun.

Earlier on Thursday, the Inspector General of Police (IGP) Mohammed Adamu had approved the sealing of the APC National Secretariat.

The Commissioner for FCT Police Command was directed to ensure that nobody was allowed into the premises to prevent a clash between factions of the APC.