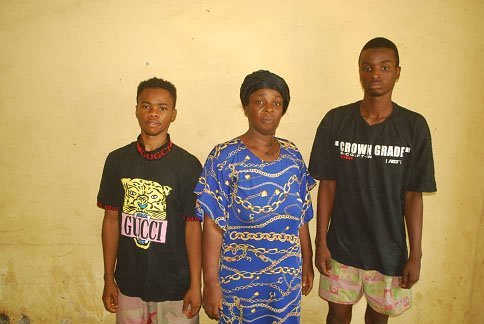 Baby buying transaction went wrong in Niger State after a team of the state Police Command burst the location where the transaction was taking place, following a tip-off.

The team of policemen in the state reportedly arrested one Stella Idris, 46, Miracle Idris (her son), 16-years-old and another identified as Ebube Ebuka, 18 for allegedly involved in the abduction of a four-year-old child.

Naija News understands that the trio who were all residents of a community in Suleja local government area of Niger state were arrested while attempting to sell an innocent four-year-old baby to a buyer.

According to the report, the father of the abducted child after a while of not seeing his son, ran to the Police ‘A’ Division in Suleja to report the incident.

A team of policemen upon receipt of the complaint swung into action and began a trail of the perpetrators’ based on suspicion to the location where the transaction was supposed to place.

It was however reported that that the buyer, upon sighting the police team took to his heels.

However, no comment has yet been made by the Police command as regards the operation, but Naija News is aware that the other three are in police custody.

Naija News Understands that the man who is an Imam in the Spring Valley Estate was arrested by officials of the National Agency for the Prohibition of Trafficking in Persons (NAPTIP) after he was reported.