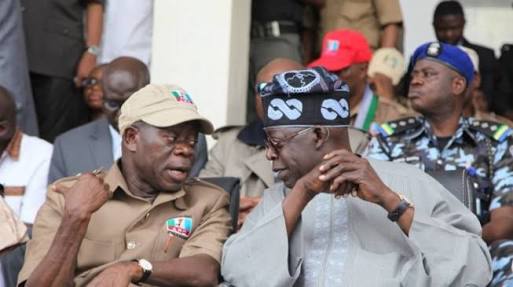 The National Chairman of the All Progressive Congress, Adams Oshiomhole has been commended by the former governor of Lagos State, Asiwaju Bola Tinubu, for his role in the 2019 presidential election which saw President Muhammadu Buhari to victory.

Tinubu in a note to the former Edo State governor to celebrate his 68th birthday submits that Oshiomhole has done so greatly to ruling party and Nigeria at large.

The birthday message which was made available to newsmen described Oshiomhole as a never relenting politician who saw his party to victory a year ago.

The message reads: “As a veteran labour leader, two-time governor of Edo State, progressive ally and politician of remarkable acumen, you have come a long way and contributed immensely to our party and our country,”

Tinubu added, “You still have much to contribute to our party and country.”

Tinubu, however, wished for a long life to Oshiomhole, praying that God should grant him more health and strength to carry on with his good service to the ruling party and Nigeria as a nation.

Meanwhile, President Muhammadu Buhari has celebrated the National Chairman of the All Progressives Congress (APC), Adams Oshiomhole, on the occasion of his 68th birthday.

In a statement by his Senior Special Assistant on Media and Publicity, Garba Shehu, President Buhari wished the former Edo State governor more wisdom and strength.