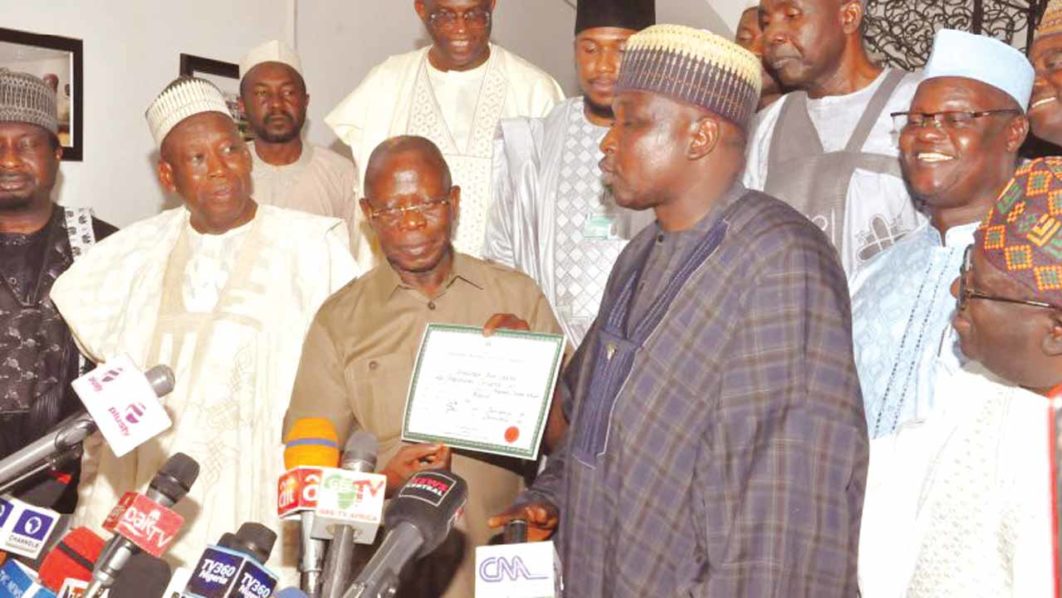 Governor Abdullahi Ganduje of Kano State and Hon. Al-Hassan Doguwa, on Tuesday, met with the National Chairman of the All Progressives Congress (APC), Adams Oshiomhole.

Naija News reports that members of the National Assembly from Kano State were also at the brief meeting held in Abuja.

Doguwa, a former majority leader of the House of Representatives, won the Saturday rerun election conducted in the Doguwa/Tudun Wada federal constituency of Kano.

Recall that the Court of Appeal had nullified his victory in the 2019 general elections, ordering the Independent National Electoral Commission (INEC) to conduct fresh election.

Speaking to newsmen after the meeting with Oshiomhole, Governor Ganduje said the meeting was to present Doguwa’s Certificate of Return to the APC national chairman.

He said: “This certificate is very important to us because it is a certificate that is carrying two caps. One, it is carrying the cap for him to be the member of the National Assembly and the other cap, he was the Majority Leader and now he is an applicant. By the grace of Allah, our national chairman, I hereby present you the certificate.”

Also speaking after the visit, Oshiomhole described Doguwa as a loyal member of the party.

He added that Doguwa’s contributions to debates on the floor of the House of Reps had been of immense benefit to the APC-led administration of the President, Major General Muhammadu Buhari (retd.).