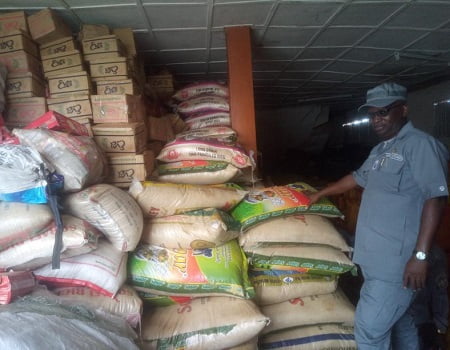 There was pandemonium as officers and men of the Nigeria Customs Service (NCS), Adamawa/Taraba Command raided Mubi town market for foreign rice and other contraband.

Mubi is the commercial nerve center of Adamawa state and shares a border with the republic of Cameroon.

During the raid, items worth millions of naira were seized which include Foreign rice, vegetable oil and soft drinks.

The customs personnel, with reinforcement from the police, stormed the commercial border town’s main market and raided many shops and stores.

The comptroller of customs in charge of the two states Kamardin Olumoh who led the team for the exercise said the raid was in compliance with a directive from the Comptroller-General of the service in Abuja.

“ The menace of smuggling around this axis is alarming for quite some time, the Comptroller General of Customs ordered that operations be carried out; that Mubi market must be mopped up of all smuggled items, especially foreign rice.

“ Today, we are in the market, and we are able to evacuate a large quantity of rice and this is a clear signal to smugglers.

“We are backed by the Law, Section 147 of Customs and Excise Management Act has given us the power to enter or search premises day or night, to break and enter, make an arrest; in fact, without a warrant and that is exactly what we did today,” Olumoh said.

There was, however, mixed reactions over the raid in Mubi with marketers lamenting and condemning it as they count their loss, while farmers on the other side, were happy and commending the exercise as a positive step to boost local production of rice.

Naija News recalls that the recent closure of Nigeria’s borders has significantly led to a reduction in the smuggling of Premium Motor Spirit, popularly known as petrol, and other contraband in Adamawa and Taraba state.