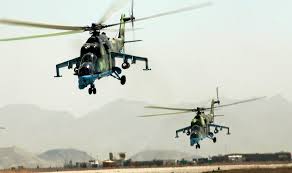 The Nigerian Air Force (NAF) has fully begun an air operation code-named “Operation Rattle Snake’’ to finally wipe out the remnant of Boko Haram insurgents in the North East, the Chief of Air Staff Air Marshal Sadique Abubakar has said.

Abuabakar  who stated this during an operational visit to the Nigerian Air Force (NAF), 105 Composite Command in Maiduguri, said the visit was to appraise the progress of the operation, interact with personnel and encourage them in the execution of the air campaign against the insurgents.

In his words “The idea of the operation Rattle Snake is to further deal with the issue of terrorism in the northeast and give necessary support to the ground troops of the Operation Lafiya Dole (OPLD) and Multi-National Joint Task Force (MNJTF).

” From the briefs; I am happy with the progress so far made, we have identified a number of targets, neutralized them and it will continue.

” The rate of efforts now is much more than what we used to have in other operations. We have quite a number of airplanes and many more will be deployed to support the operation.

“The idea is to take full advantage of the situation on ground to degrade Boko Haram insurgents and ensure a secured country,” said Abubakar.

‘Operation Rattle Snake’ was aimed to wipe –out Boko Haram terrorists hibernating in the fringes of Sambisa Forest and Lake Chad Basin.

The campaign targets selected locations in the region to further degrade remnants of the insurgents.