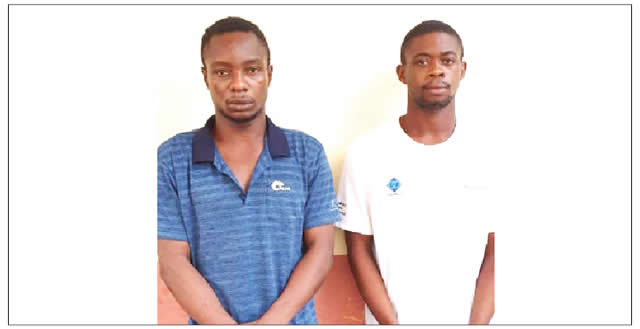 Two men identified as Nneji Onumajun and Obioma Abua have been arrested by the operatives of the Special Anti-Robbery Squad of the Imo State Police Command.

The duo were arrested for allegedly killing a man identified as Iheanacho Okorie. The Police noted that they are known for terrorising the Oguta area of the state.

The spokesperson of the command, Orlando Ikeokwu, said, “On November 14, 2019, at the Ogbefu Market square, Agwa, in the Oguta Local Government Area of Imo State, SARS operatives, upon a written petition by a family over the murder of their son, Iheanacho Okorie, aka Otika, we swung into action.”

“Following a tip-off, two suspects, Nneji Onumajun, 29, and Obioma Abua, 25, were arrested in connection with the killing.”

“On December 2, 2019, after professional diligence, interrogation and interviews, the two suspects confessed to the crime. They confessed to how the two of them and a third person, who is at large, pursued the victim on a motorcycle before he was shot at close range at the Ogbefu Market, Agwa, Oguta LGA of Imo State.”

“Not satisfied with the shooting, they also used a knife to stab him all over his body. An investigation is ongoing and further developments will be communicated.”