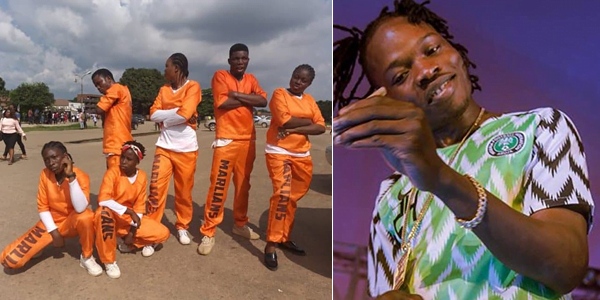 Some students and fans of Nigerian Artiste, Naira Marley in their sizable numbers, stormed the University of Benin (UNIBEN) in their costumes with the inscription “Marlians.”

Naija News understands that the students arrived their campus on Wednesday morning to celebrate their costume day in the institution in grand style.

The dressing in orange, overhall outfit to show their allegiance to the Marlian family comes after the continuous adjournment of Naira Marley’s trial.

Recall that Naira Marley, although has been released on bail, he is, however, standing trial over fraud-related allegations levelled against him by the Economic and Financial Crimes Commission (EFCC).

Naira Marley while reacting to the continuous adjournment of his case, took to his Twitter handle to react.

Marlians movement proprietor, Naira Marley had also released his song ‘soapy’ this year and in the video, they were all dressed in orange outfits to mimic prison attires.