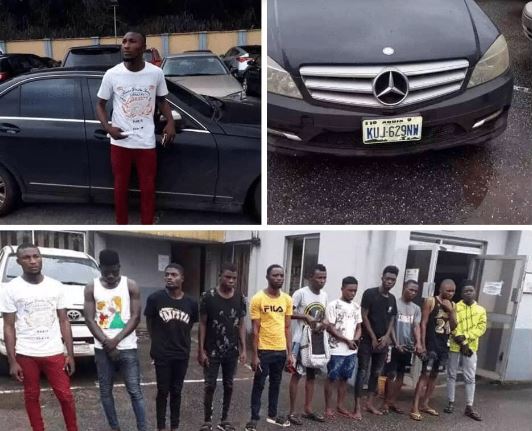 Operatives of the Economic and Financial Crimes Commission (EFCC), the Benin zonal office have arrested at least eleven middle-aged men, over their alleged involvements in internet fraud.

Naija News understands that the suspects were apprehended by the EFCC operatives at their hideouts in Sapele, a suburb in Delta state.

The arrest of the suspects could be linked to the result of an early morning raid in Sapele, Delta State on Saturday.

The arrest of the suspect was made public in a statement signed by EFCC Spokesman, Tony Orilade.

The raid was conducted in the wee hours of the day and based on intelligence.

This online news platform understands that items such as; a laptop computer, a Mercedes-Benz car, computers, mobile phones, flash drives and internet modems were recovered from the suspects at the point of their apprehension.

The statement by the EFCC also noted that the suspects have already started making useful statements to aid the anti-graft agency with their investigation.

The statement also noted that the suspects would be charged to court for possible prosecution upon the completion of investigation.