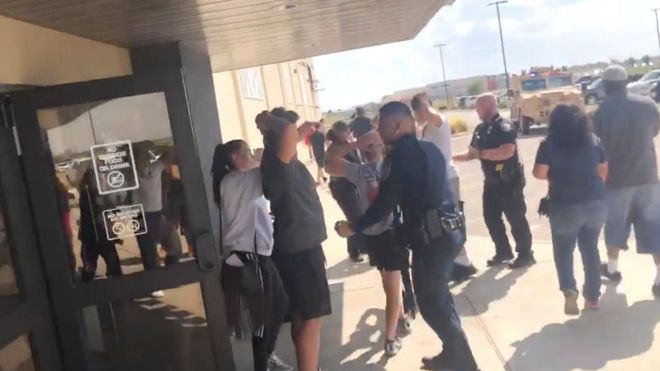 Naija News understands that understands the shoot out occurred in two separate locations which are; Midland and Odessa, both in Texas.

The Texas Police while speaking on the Texas shooting said there are two shooters in two vehicles involved. The Police, however, went ahead to assure that a Manhunt had already commenced with the aim of bringing the perpetrators of the crime to book.

This online news platform understands that the Midland Police Department while confirming the Texas gun violence wrote on Facebook as thus: “Update * We believe there are two shooters in two separate vehicles. One suspect is believed to be at the Cinergy in Midland and the other is believed to be driving on Loop 250 in Midland.

“The two vehicles in question are: gold/white small Toyota truck and a USPS Postal Van. Please stay away from these areas and stay indoors.

“There are reports of an active shooter at the Home Depot in Odessa. For the safety of the public and law enforcement please stay away from the area and stay in your homes. We will update with more information as soon as possible.”

Similarly, the Odessa Police Department in its reaction to the Texas killing said: “A subject (possibly 2) is currently driving around Odessa shooting at random people. At this time there are multiple gunshot victims. The suspect just hijacked a U.S. mail carrier truck and was last seen in the area of 38th and Walnut. Everyone is encouraged to get off the road and use extreme caution! All law enforcement is currently searching for the suspect and more information will be released as soon as it becomes available.”