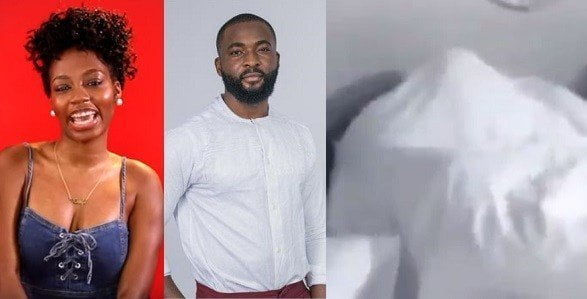 Big Brother Naija (BBNaija) housemates were left in shock as they witnessed Khafi and Gedoni making out under the duvet last night.

In a video obtained by Naija News, Esther while on the same bed with Frodd was seen trying to witness the whole scene as she played supprised.

The sexual act between Gedoni and Khafi comes amidst speculation that Khafi might be sacked from the Metropolitan Police for leaving for Big Brother Naija House without getting due permission and also “engaging in sex on National TV.”

However their sexual moment last night had witnesses, and they were fellow housemates, Frodd and Esther.

The shock they both expressed as they see their fellow housemates have fun have since gone viral on the internet.

Esther and Frodd watching Khafi and Gedoni under the Duvet ? #bbnaija pic.twitter.com/V1z5LJ4jPx