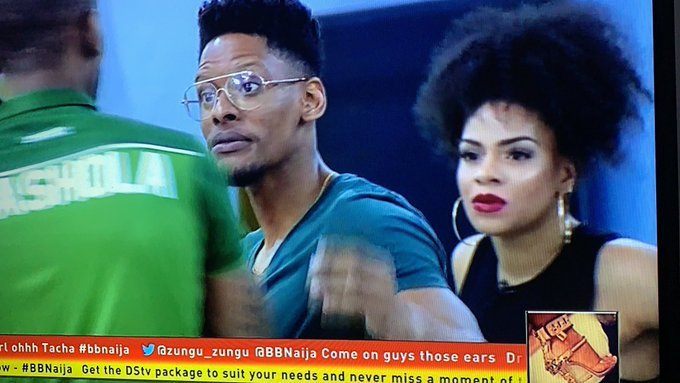 A storm of reactions by Nigerians has greeted the introduction of two new housemates into the ongoing Big Brother Naija 2019 reality television show tagged “Pepper Dem.”

Naija News reports that the two housemates identified as Venita and Elozonam were introduced into the house on Tuesday evening, July 30.

This online news platform understands that the two housemates were introduced into the “Pepper Dem” house as part of the BBNaija Twist for this season.

Venita and Elozonam are coming into the house after Biggie evicted six housemates, Avala, Isilomo, Ella, Kim, Nelson and Thelma from the BBNaija 2019 reality show.

Moments after Venita and Elozonam were introduced into the BBNaija house as part of the twist by Biggie, Nigerians took to the micro-blogging site, Twitter to air their opinions on the introduction of the new housemates.

These new housemates will pepper the old one ?????
Elozonam that is a mad boy ???Venita na craze
It's time to relax and watch as the drama unfolds#BBNaija #bbnaija19

Wait they brought new hms? Elozonam and Venita wey we don dey watch in Nollywood since? These guys are celebs already now.

Scenes when Esther falls for Elozonam, and Venita becomes Tacha version 9.0… Frodd back to ZERO. Scenes???#BBNajia

Venita's catch up game is top notch. But Elozonam ??#BBNaijaTwist

Why do i feel they'll be fake housemates#BBNaija

#BBNaija
Venita and Elozonam ain't new faces, they are celebrities already.. My deputy is doing something I don't like.
wakanda thing is this?? Bring in people from the hustle, not familiar faces, nd y are the HMs acting like dey don't recognize them…ah dunno wah hiz goin nor

Mercy claiming her territory against Venita during the introductions, with the whole house hailing her???

All hail the queen!?

So We Now Have 3 Warri People In The House.

Big Brother Is From Warri Then, You Can’t Tell Me Shit??

Venita and Elozonam are fake housemates

They will not be voted for but cant be on for eviction, they are expected to spend a month or so.#BBNaijaTwist

The introduction of two new HMs Venita and Elozonam. So Biggie this is your twist???? ????Blehhhh #BBNaija2019 #BBNaija

#BBNaijaTwist is set to shake the House up with the entrant of two new Housemates. #Venita and #Elozonam are the latest additions to the Pepper Dem Gang.

Venita, 32, is a new Housemate to make her way into the House. The actress from Delta.#BBNaija pic.twitter.com/st7R5VXQdl

Elozonam and Venita. I guess the house needed Osu Orji, Yaji and what not to change our taste buds a bit… that's fine yo #BBNaija2019 #BBNaiija #BBNaijaTwist pic.twitter.com/4eOBcXFOQ5

I like Venita and Elozonam they re cute ??? #BBNaija Pls VOTE Mike ..God bless u

Elozonam looks like a grown up korede bello that Diane and Esther will want for lunch and Dinner….

Venita and Elozonam are both actors… They will really light up the house… #BBNaijaTwist pic.twitter.com/stZCyeTDLD