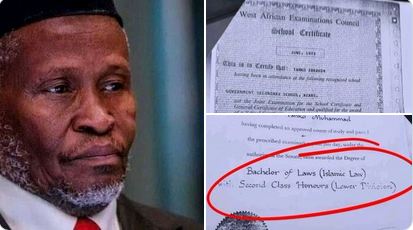 Naija News recalls that Justice Muhammad was on Thursday, July 17 confirmed by the Nigerian Senate after his name was forwarded by President Muhammadu Buhari following his confirmation by the National Judicial Council (NJC).

The NJC, chaired by former President of the Court of Appeal, Justice Umar Abdullahi, had on July 11 recommended Justice Muhammad to President Buhari for confirmation as substantive CJN.

This online news platform understands that the new CJN took his oath office at a brief ceremony inside the presidential conference room in Abuja Nigeria’s capital.

During his screening, CJN Muhammad submitted his certificates to the Nigerian Senate led by Ahmad Lawan but failed to submit his primary school certificate.

The CJN told the Senate that vicious termites invaded his home in Bauchi State, northern Nigeria in 1998 and devoured all documents inside, beyond recovery.

“No portion of the certificate was salvaged,” Mr. Muhammad, who replaced Justice Walter Onnoghen as Nigeria’s CJN, said.

Days after the screening and his swearing-in, his WAEC certificate which he presented before the Senate emerged.

A statement of the result of Justice Muhammad shows that the CJN three credits and two Passes.

The WAEC result of the CJN shows that Justice Muhammad, who sat for WAEC in June 1973, had C6 in Islamic Religious Knowledge (IRK), C4 in History and C5 in the Hausa Language.

Justice Muhammad also had Pass in Arabic and Pass in Chemistry. Mathematics and English language were, however, missing from the result presented by the CJN.

Moments after the WAEC result of the CJN emerged, Nigerians took to the micro-blogging site, Twitter, to blast Justice Muhammad over what they described as poor results.

Waec result with No maths and English

This Man has no business as CJN
He should be serving in the mosque as an Imam pic.twitter.com/2T6E8wOywq

So not only did our Chief Justice read Sharia Law, he graduated with a second class lower, in Sharia Law! And is it true that in those days it's only subjects you pass in waec that will be included in your result? If true then you CJN failed English and aced Hausa ?? https://t.co/CSoee945Z5

@AishaYesufu said that Most Northern elites are not educated and it's true. @MBuhari is not Educated and the worst of it currently is this CJN waec result that's trending right now. How did he manage to study Law then?‍♂️? pic.twitter.com/odp33uCMYz

See our CJN WAEC result. He has no English nor Literature yet he studied Law. pic.twitter.com/WCGUik9RgO

SMH…From #WAEC translation of this result, Subjects omitted usually means F9 (Fail). Obviously, the #CJN of #Nigeria had F9 in Maths & English. I also wonder what Chemistry is doing in a “core Art” subjects. Iyam not understanding again ?‍♂️ https://t.co/21xyLhlOit

Our CJN Tanko's WAEC…….. Technically, looking at his Result we should now know that our imposed CJN, Never had a Basic English background…… pic.twitter.com/Ic4pBwb9eJ

Imagine! See the kind of WAEC result CJN got from secondary school. Too bad!

I doubt if he attended primary school. The one he is claiming termites ate his 1st school leaving certificate may be a lie.