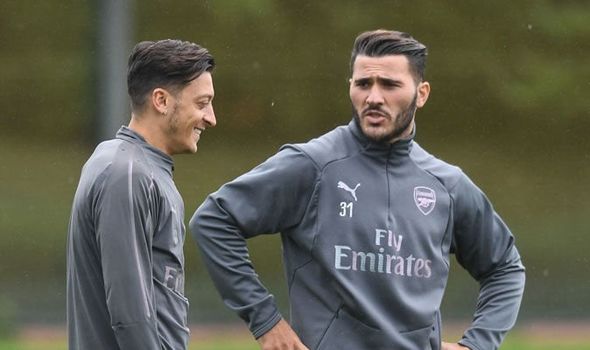 Arsenal players Mesut Ozil and team-mate Sead Kolasinac were on Thursday victims of an attack by knife-wielding moped thugs in London.

Ozil was seen racing down Golders Green Road in his black Mercedes G-Class SUV as two thugs on mopeds chased him.

According to The UK Sun, Kolasinac is then seen leaping from the £100,000 vehicle and fighting off the armed robbers with his bare hands.

An Arsenal spokesman told Mirror Football: “We have been in contact with both players and they are fine.”

A police statement said: “We were called to Platts Lane, NW3, shortly before 5pm to reports of an attempted robbery. It was reported that suspects on motorbikes had attempted to rob a man.

“The driver, along with his passenger, managed to get away unharmed and travelled to a restaurant in Golders Green, where they were spoken to by officers. There have been no arrests. Enquiries continue.”

An onlooker told Mail Online: “It was totally mad and strange. His car was standing there empty in the middle of the road with its door hanging open. It is very distinctive, with gold trim.

“Ozil looked absolutely terrified, as anybody would after being chased by men with knives. He looked like he was running for his life. And I suppose he was.

“I saw him disappear into the restaurant with the motorcycle guys on his tail. They didn’t take off their helmets and were all in black, wearing long-sleeved tops in this hot weather.”