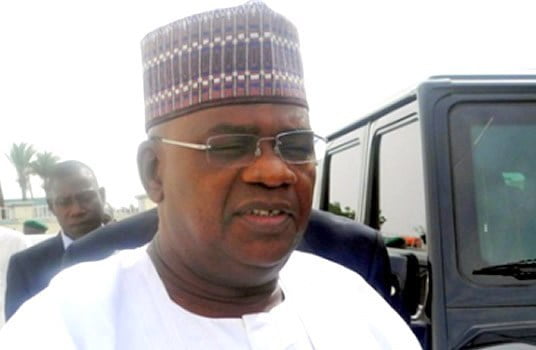 In a statement to newsmen by his counsel, Paul Erokoro (SAN), the former Governor of Gombe State claimed that the charges had become more of persecution than prosecution.

Danjuma Goje stated that the N25 billion fraud allegedly committed by him that has been bandied about in the media, never featured in the case.

The former Senate Appropriation committee chairman noted that the office of the Attorney General of the Federation (AGF) should be commended for saving the face and the resources of the government by terminating the futile proceedings.

The statement titled: “Truth about the withdrawal by the Attorney General of the Federation of the criminal charges against Senator Danjuma Goje,” reads: “Following a spate of inaccurate and untrue reports in the media on the withdrawal of criminal charges against Senator Goje, it has become necessary for the correct facts to be publicly stated, to avoid genuine misunderstanding by well-meaning commentators and expose the malicious insinuations of mischief-makers.

“First of all, the so-called ‘N25 billion fraud’ that has been bandied about in the media, never featured in the case. The sum total of all the monies mentioned in the charge was about N8 billion.

“Of that total, N5 billion was a loan taken from Access Bank for the completion of infrastructural projects such as the Gombe Airport, waterworks, numerous roads, Gombe Jewel Hotels, schools, hospitals and rural electrification. The bank testified in court that the money was properly utilised for the projects. The Economic and Financial Crimes Commission (EFCC) investigators also confirmed to the court that the projects were completed.

“On the N1 billion agricultural loan, the Central Bank of Nigeria (CBN) testified in court that the loan was utilised in full compliance with the bank’s loan conditions.

“Other witnesses told the court that the governor never awarded any contract for the supply of food to Government House and government guest houses during his tenure for the N1 billion alleged in the charge or for any other sum.

“On the N1.6 billion for the supply of English dictionaries for primary and secondary schools, the court was told that the Universal Basic Education Commission (UBEC) gave its approval and that the contract was advertised in two newspapers and that reputable book publishers and suppliers tendered and that the State Universal Basic Education Board (SUBEB) awarded the contract to the lowest bidder.

“As can be seen from the above, the 19 counts of the charge that were framed around the above monetary issues collapsed during the trial.

“The prosecution’s own witnesses completely exonerated the defendants. It was for this reason that the 19 counts were dismissed by the court on the ‘no case’ submission…”

“The two remaining counts challenged the (former) governor’s power to approve the recommendation of the Commissioner of Finance that the old, unserviceable buses of Gombe Line be sold to the public, following the purchase of new ones.

“As every adult in Nigeria knows, the sale of unserviceable vehicles is a routine exercise periodically undertaken by the government and even by private organisations. This is the first time that the authority of a governor to approve such a sale has been made the subject of a criminal charge.

“The overused buses, many of which had become scraps, had been in use as commercial passenger vehicles for seven to eight years.

“The buses were valued by a proper Board of Survey at the cumulative sum of N22.5 million. That value was realised from the sale and the proceeds were paid into the account of the Gombe State government.

“The prosecution witnesses testified that the procedure was proper and that the (former) governor did not buy any of the buses and took no benefit personally from the sale.

“The star witness of the prosecution, a senior EFCC operative, who headed the investigation, told the court that throughout their investigation, no money belonging to the Gombe State government was traced to the (former) governor, his family members or associates.

“The witnesses also testified that the (former) governor was a prudent manager of government funds and that it was he who even introduced Due Process into procurement procedures in Gombe State.

“The two counts of the charge that were withdrawn by the AGF were an embarrassing triviality.

“The charges had become more of persecution than prosecution. It was, therefore, no surprise to those familiar with the case when the Attorney-General of the Federation withdrew those ridiculous charges.

“The Attorney General did the right thing and should be commended for saving the face and the resources of the government by terminating the futile proceedings.”