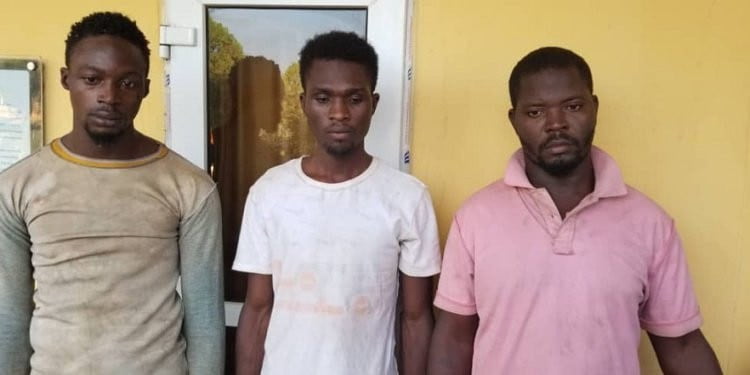 Naija News understands that the suspects were arrested for their alleged involvement in the murder of the couple; one James Olaosebikan, 72, and his wife, Esther, 68.

They were murdered in their home in Sagamu, Ogun state.

The spokesman of the Police in the state, Abimbola Oyeyemi made this known while parading them recently.

The state Police gave the names of the suspects as; Ibrahim Uthman, Aba Abdulkareem and Abdulhamid Ibrahim.

The suspects were said to have stormed the residence of their victims, stripped them of some of their and apparently shot them.

The incident was immediately reported to the police by the couple’s son, Joseph Olaosebikan.

“Upon the report, the Commissioner of Police, Bashir Makama, ordered the DPO of Sagamu Division, SP Okiki Agunbiade, to fish out the killers within the shortest possible time. The DPO and his men embarked on technical and forensic investigation of the case and their efforts yielded a positive result with the arrest of three members of the gang.

They confessed being members of a robbery gang and that one of their colleagues, now at large, invited them for the purpose of robbing an old couple and a nearby shop. But on getting to the house, they discovered that the couple recognised one of them, hence they killed them,” Oyeyemi said.

Oyeyemi said that the state Commissioner of Police, CP Bashir Makama, has already ordered the Homicide Section of the State Criminal Investigation and Intelligence Department (SCIID) to take over the case for proper investigation and possible prosecution.