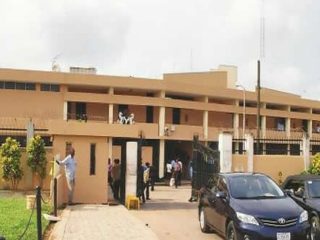 The Speaker of the Edo State House of Assembly, Hon Frank Okiye, warned the House of Representatives against moves to disrupt activities of the State Assembly.

Naija News reports that the House of Reps has issued a seven-day ultimatum to Governor Godwin Obaseki to issue a fresh proclamation to convene the 9th Edo state assembly.

The federal lawmakers added should the governor fail to carry out the order within the stipulated time, they may have to take over the functions of the state lawmakers.

Reacting to the resolution by the House of Reps, Okiye advised the National Assembly to act as agents of peace and not merchants of crisis.

He also cautioned the Inspector General of Police and heads of the Department of State Services (DSS), the National Working Committee of the All Progressives Congress (APC) to respect a subsisting court order restraining them from interfering in the activities of the Edo Assembly.

Okiye said: “It has come to our knowledge that the Ad-hoc Committee of the House of Representatives investigating issues surrounding the inauguration of the Edo State House of Assembly has recommended that the Inspector General of Police (IGP) and Department of State Services (DSS) should seal up the Edo Assembly.

“Considering what we came to know in the course of this process, the recommendation of the Ad-Hoc committee does not come to us as a surprise.

“For example, the chattered plane marked 5N FCT, which brought the committee members to Benin City was paid for by the National Chairman of All Progressives Congress (APC), Comrade Adams Oshiomhole, who is a major party in the disagreement.

“Also, the younger brother to the National Chairman, Seid Oshiomhole, in a recent leaked audio conversation, revealed the underhand dealings in Abuja regarding the matter. He stated that Oshiomhole and his proxies have been having meetings with the committee members and other actors in the issue in Abuja and dolling out money to ensure the issue goes in their favour.

“Moreover, we want to draw the attention of the general public and the police to a subsisting court order restraining the Police, headed by the Inspector General of Police, Mohammed Adamu; the National Working Committee of the All Progressives Congress (APC), the Department of State Services (DSS) and their agents, from interfering in the affairs of the Assembly, as the House has been going about its activities peacefully and without rancor.”

“The National Assembly must take note that they are expected to act as agents of peace and not merchants of crisis. Edo State has always been peaceful and any attempt for them to carry out this order will certainly disrupt the peace that is currently being enjoyed in the state,” he added.