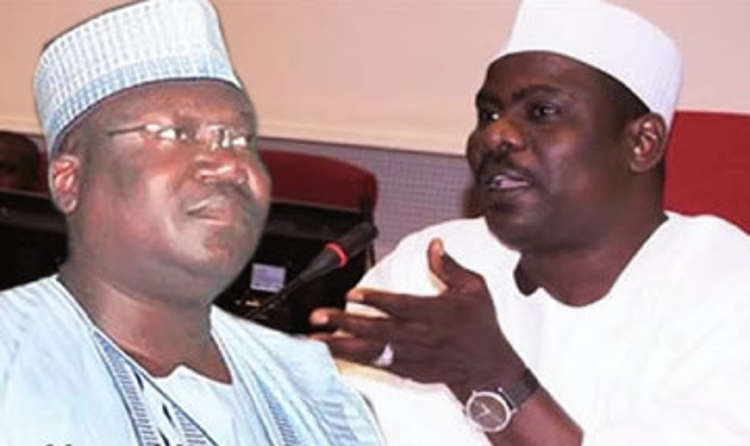 Senators Ahmed Lawan and Ali Ndume, the two top contenders for the position of Senate Presidency in the 9th Senate, have intensified efforts to woo Senators-elect of the Peoples Democratic Party (PDP).

It was gathered that Ahmed Lawan met with former Deputy Senate President, Ike Ekweremadu, and other senators-elect.

According to The Punch, other senators-elect at the meeting are Eyinnaya Abaribe, Emmanuel Bwacha, Dino Melaye, Theodore Orji, Philip Aduda, and James Manager.

The meeting was confirmed by the spokesperson of the Lawan Campaign Organisation, Senator Sabi Abdullahi.

He said, “The 9th Senate is poised to deliver on the expectations of Nigerians, without taking them for granted. Senator Ahmad Lawan in company with other senators-elect on the platform of the APC met with some PDP senators this (Sunday) morning in the residence of the Deputy Senate President of the 8th Senate, Senator Ike Ekweremadu.

“There were some other PDP senators on hand in Senator Ekweremadu’s house to receive Senator Lawan and members of his campaign team.”

Also, an associate of Senator Ali Ndume confirmed that the former Senate leader met with senators-elect of the PDP on Sunday.

The lawmakers associate disclosed that he was well received by senators-elect of the opposition party.

He said, “The senator (Ndume) met with the PDP senators on Saturday but he would not blackmail the distinguished senators by saying that they have endorsed him even when their party has yet to take a position on it.

“He will not mention the names of those he met with or blackmail his colleagues with any endorsement list compiled with a single handwriting.”