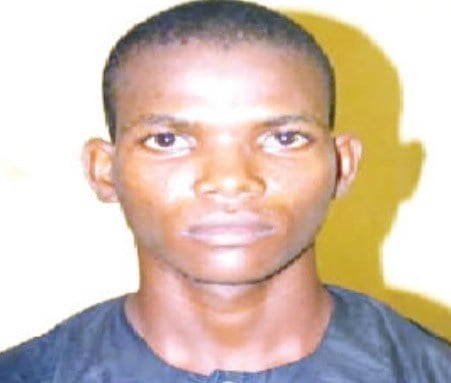 Confirming the arrest today, the State Police Command said a team of policemen attached to the New-Bussa Division apprehended Audu over Mohammad’s murder.

Umar, who lived with the deceased in the same address, was alleged to have killed the victim on suspicion that Mohammadu was making love advances to his wife.

It was learned that sometime in May 2019, the suspect’s wife, Hassan Audu, reported to him that the deceased was disturbing her for an amorous relationship, which she turned down.

It was gathered that the suspect had warned the deceased on several occasions to desist from making advances to his wife but he reportedly ignored the warnings.

Punch reports that on the day of the incident, the suspect, who was unable to control his anger, took the laws into his hands and attacked the victim with a machete and inflicted deep cuts on his head, which resulted in Mohammadu’s death.

In an interview with Northern City News, the suspect said, “I don’t regret killing him because Mohammadu decided to die like a chicken. In his next life, he will not make advances to married women.

“I am ready to bear the consequences. Let the law take its course. I am fulfilled that Mohammadu will never see my wife again, Allah will judge him.”

The state Police Public Relations Officer, Mohammad Abubakar, said that the matter would be charged to court after investigation.

Naija News recalls that in a related development, a Policeman who was allegedly under the influence of alcohol killed a 21-year old who happens to reside in the same community as him in Abia state.