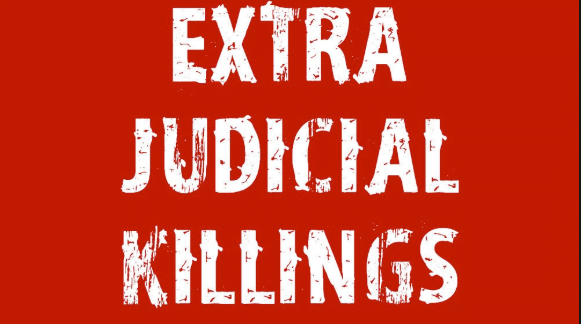 The people of Okwulaga Afaraukwu in Umuahia North Local Government Area of Abia State have stormed the streets of Umuahia, the State capital, to protest the killing of an indigene of the area by a policeman identified as Collins Akpougo.

Akpougo, a police Sergeant said to be at large, it was gathered, is attached to the Special Protection Unit (SPU) of the Nigeria Police Force, Abia State Command.

Naija News had earlier reported how the Policeman (Akpougo)Killed one Christian Onuoha who is resident in the same community as he.

It was learned that the indigenes in protest, already set the Police officer’s car on fire, while Youths of Okwulaga were seen marching across major roads, chanting songs and carrying placards, caused traffic gridlock.

A woman leader from the community Mrs. Ngozi Ogbonna who led the protest told reporters the deceased Chukwubuike Christian Onuoha, (21) was shot right in front of his father’s compound on Monday night.

Narrating the incident Ogbonna said Onuoha was in the company of other youths from the community when the Police drove towards them on a Toyota Hilux van.

According to her, the cop reportedly flashed his Van’s light on the youths, prompting Onuoha to dim his light.

She added that rather than dim the van’s light, the Police officer alighted from the vehicle and shot the deceased on the shoulder.

According to her, while the youths including the deceased’s elder brother tried to engage the policeman, he scared them away with his gun.

He later reportedly shot the deceased a second time on the chest before abandoning his van on the scene and took to his heeds.

She said: “We know Collins very well. He is tenant in our community. He killed our son for no just cause.

“He was confirmed dead at Federal Medical Centre Umuahia this morning.

“We have gone to the Government to complain, we are also going to the police command to express our grievances to them. All we want is justice in this matter.”

The Nation reports that the youth Protest, earlier today caused confusion within Afaraukwu and the state capital until Policemen dispersed the protesters by policemen who shot tear gas canisters into the air, before condoning some sections of the Umuahia Bende road where the CPS is located.

Some of the residents, who spoke anonymously, said they suspected Akpougo was under influence to have prompted him to kill someone from the same community he lives.

He said: “We got a signal last night that a police shot a resident of the Afara community.

“The Commissioner of Police in the state has ordered a thorough investigation into happened.

“But meanwhile the CP has sent a delegation to commiserate with the family and community of the deceased.

“He has assured them (victim’s family) that no stone would be left unturned until justice is served in this matter”.

A statement by Elder Ifeanyi Agbai, Permanent Secretary, Ministry Of Information said: “The attention of Abia State Government has been drawn to reports of extra judicial killing of a young man at Afara area of Umuahia by an off d police officer.

“We wish to call on the state Commissioner of Police to urgently investigate the incident and bring the culprit to justice immediately.

“It is unacceptable to the government for those paid to protect citizens to turn their weapons against innocent citizens under any guise and we wish to assure our people that the state government will ensure that justice is not only done but necessary measures are taken to prevent future similar incidents, as reported.

“We wish to express our heartfelt condolences to the family of the bereaved, the affected community and people of the state and call on all to remain calm while the authorities unravel the immediate and remote cause(s) of the incident with a view to ensuring that justice is done.”