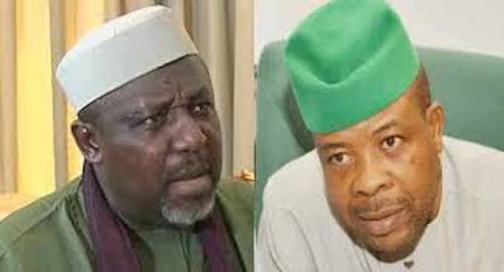 The Imo state governor, Emeka Ihedioha, has given the immediate past Governor of Imo, Rochas Okorocha a 24-hours ultimatum to handover to his government.

Naija News understands that Ihedioha gave the immediate past Governor up to midnight of Tuesday, June 4, to do a proper handover.

The Governor gave the ultimatum to his predecessor while speaking at the Government House in Owerri, the state capital during the swearing-in of the Secretary to the State Government (SSG), Uche Onyeaguocha and Chief of Staff, Chris Okewulonu.

The governor afterwards ordered the Permanent Secretary and Head of Service, under Okorocha, to quickly prepare all the necessary documents and hand them over to the SSG, and Chief of Staff, before midnight of Tuesday.

While issuing the directive, Ihedioha briefly said: “I direct Head of Service and Permanent Secretary, to ensure a complete handover of all government properties, the last administration utilised on behalf of Imo people to SSG and Chief of Staff of Imo state government. I want the process to be completed by midnight tomorrow.

“I spoke to Imo people that we will start work, we will resume work. We will give no excuses of not performing. We will give dividend of democracy irrespective of the status of the state of facilities I inherited.

“The government that ended was not prepared to handover or ready to receive us. I thank Imo people for receiving us and we shall serve the state with the fear of God.”