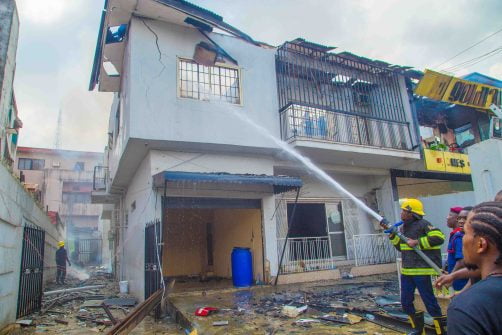 Officials of the Kano state fire service have on Tuesday rescued five trapped persons in a building at Yakasai, Kano state.

Naija News reports that the fire service officials rescued a child and four adults trapped in the burning behind Rimi market.

The spokesman of the service, Saidu Mohammed who made the disclosure in an interview obtained by Naija News gave the names of those rescued as; Malam Isiyaka, 65, Hajia, 50, Abubakar, 22, and Faruk Ishak, 6.

Mohammed revealed that the house was an upstairs building of about four bedroom flat. He said the fire was curtailed as the operatives of the fire service arrived the scent on time.

Mohammed confirmed that several others were injured as a result of the inferno which broke out during the late hours of Tuesday, February 12.said that the incident was caused by an electric spark.

The victims of the inferno who sustained injuries had since been taken to the Murtala Muhammed Specialist Hospital, Kano, for treatment.

“We received a distress call from Malam Sani Yusuf at about 9:40 p.m. that there was a fire outbreak at a dwelling house.

“Upon receiving the information, we quickly dispatched firemen and fire engine to the scene at about 9:44 p.m.,’’ he said.

This report comes in few days after Naija News reports that an inferno destroyed goods worth millions of Naira in a popular market in the state.