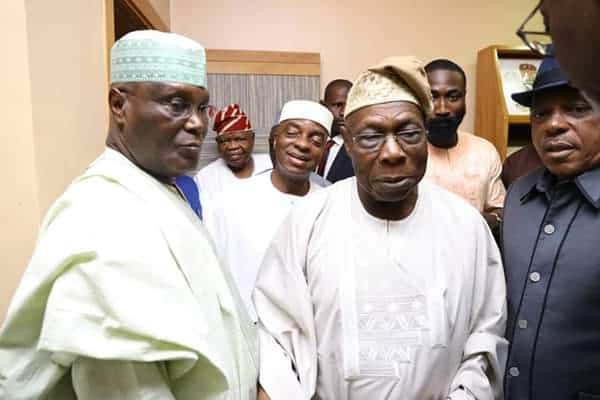 Obasanjo Stands By His Affirmation For Atiku

Obasanjo spoke at the 2019 Island Club Quarterly Business Lecture, where the former vice president delivered a lecture titled, “My vision to get Nigeria Working again”.

In his remark, Obasanjo believed that Atiku had the experience, the capacity, and passion to move the country forward.

According to him, his support for Atiku should no longer look strange to Nigerians, despite what he said and wrote about him in the past.

Recall that Obasanjo and Atiku had formerly, about six months ago exchanged critics at each other with the former saying ‘If I support Atiku for anything, God will not forgive me.”

He, however, said the PDP candidate had demonstrated what was expected of a committed and sincere leader by owing up to his past mistakes and showing remorse.

He said that Atiku was not infallible like every other human being and that he, (Obasanjo) would be playing God by not forgiving the former vice president.

Obasanjo: “I have been called names because of my position on Atiku Abubakar, the Waziri Adamawa. “Everything I have said as far as I have knowledge of Atiku, I have not retracted and I stand firmly by them because they are to the best of my knowledge true.

“And neither has what I have said and written about Buhari been controverted, if anything, they have been confirmed and proved beyond any shadow of doubt. “But Atiku has done things which are absolutely imperative for a leader to be followed and believed. “First, know who you are and present yourself as you are – a human being in blood and flesh and susceptible to human mistakes and human frailties.

“Don’t cover up with a sanctimonious veneer of bogus integrity, incorruptibility, uprightness, goodness and false figures and statistics, all of which are contrived to deceive, to cheat, to plunder and to destroy.

“Atiku never claimed to be a saint and I never described him as such. I will never so describe any human being alive let alone calling him a Messiah.

“On an occasion in the past when I said that someone was not a Messiah, some Nigerians out of bad “belle” were up in arms.

2019: APC Confident That Saraki Will Not Win Election Nor Return As Senate President