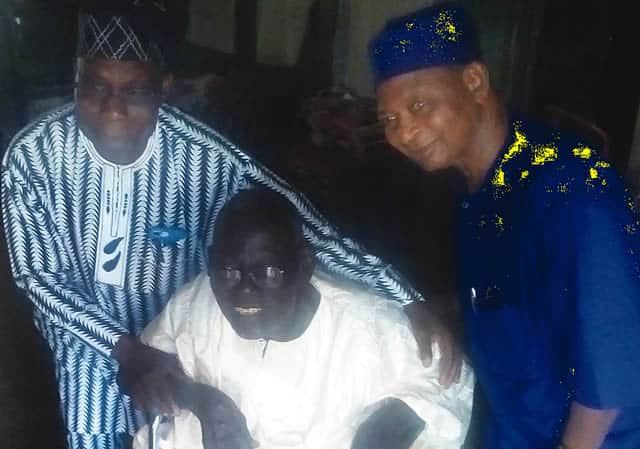 Kehinde Akinyemi, the Media aide to the former president, in a statement made available to journalists in Abeokuta on Wednesday, said that the former president had with him on the visit, his classmate and close friend, who is the traditional ruler of Ibara, Oba Jacob Omolade.

The Punch reports that both Obasanjo and his friend, Oba Omolade were students of Pa Popoola at the Baptist Boys High School, Abeokuta, in the 1950s.

The statement said Obasanjo engaged the former tutor in banters while recalling some old memories.

The statement read in part “The trip, which was led by one of the teacher’s children, Akin, from his Abeokuta residence, saw Obasanjo arriving into the waiting arms of Mr and Mrs Popoola at the family house in Ilaro, Yewa South Local Government Area of Ogun State, at around 5pm.

“It was an elated Pa Popoola who said. ‘I can’t believe it. You mean I will host you in my house today before my death? It was 35 years ago I met you. Oh! I am delighted, very delighted’.

“Obasanjo made a move to take over his (Popoola’s) wheelchair to drive him back into the large sitting room, saying, ‘We are delighted too sir. Let us come inside. I am here with Kabiyesi too. You remember him? Jacob Omolade, that boy that’….”

“Ahhh! Kabiyesi o! Yes, I remember him. The Olubara,” Popoola interjected, as the traditional ruler stretched out a hand to shake him.

Obasanjo said that he has always has it in mind to visit his former teacher, but for his tight engagement, he has been unable to.

Pa Popoola thanked the visitors and prayed for their continuous success in life.

When our correspondent pointed out the age difference between the ex-teacher and Obasanjo, who will be 82 next year, Akinyemi said, “Anyone that attended the standard class in those days could teach. With a three-month course then, you could be a teacher. He (Popoola) could have been a Grade II teacher then with eight or nine years’ difference between the ages of the teacher and his pupils.”