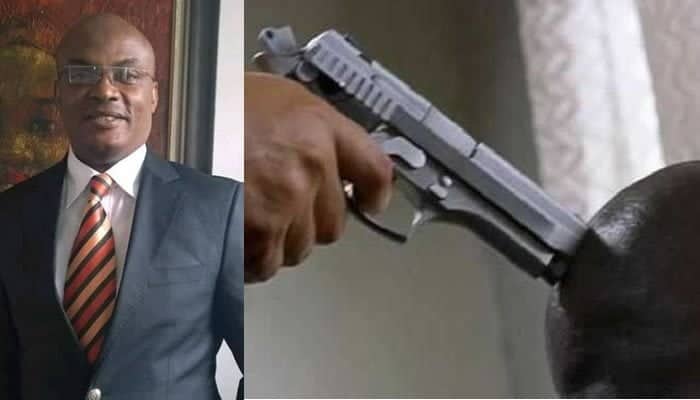 Events that led to the Murder of Akwa Ibom Gubernatorial Candidate, Okon Iyanam, at his hotel in Ogun State has been revealed.

Punch reports that Iyanam who is also a former Executive Director, Sales and Marketing, Globacom Limited, was hosting a birthday party at Heritage Hotels and Resorts, Mowe, in the Obafemi Owode Local Government Area of the state on Wednesday, when a four-man gang barged in dispossessed guests and workers in the hotel and thereafter asked for the Manager.

According to Preliminary investigation, On being told the whereabout of the Manager, the gang shot him in the neck at close range and fled from the scene.

The 52-year-old was said to have been rushed to a hospital in the area, where he was confirmed dead.

A source said the gunmen struck around 1.30am.

He said, “They were four in number. They entered around 1.30am on Wednesday and after robbing guests of their phones, they shot the chairman dead and left.”

The late Okon, according to his LinkedIn profile, worked as the Chief Marketing Officer of telecommunications company, Vmobile (now Airtel) before moving to Globacom Limited, where he reportedly rose from the position of a Marketing Manager to the Executive Director of Sales and Marketing.

He left the company in 2011 and became the Executive Director of another firm, Expertro Energy, in August 2012, before retiring into full time consulting.

His brother, Victor Iyanam, who confirmed the incident in a Facebook post on Thursday, said Okon also dabbled into farming in Katsina State, while running his newly established hotel in the Mowe area where he also had a farm.

“Okonpapa (Okon) had just recently opened the Heritage Hotels and Resorts in Mowe, Ogun State, where he spent most of his time in order to make the new business successful. While a birthday party was going on in the hotel, some men, suspected to be either armed robbers or hired assassins, crashed into the place about 12.30am and asked for the owner.

“When he was eventually identified, he was shot at close range in the neck region. He stood no chance. He died instantly. The police deposited his body in a morgue. I rushed to Lagos upon the information delivered to me and confirmed for myself the level of wickedness anybody could deliver to a man whose only crime was working hard for his livelihood,” the post read.

Victor said the Political Science graduate had vied for the governorship position of Akwa Ibom State on the platform of the Peoples Democratic Party, adding that when he failed, he moved to Accord Party.

A check on the Facebook page of the victim showed he was an active social commentator, who bared his mind on political and social issues in the country.

His friends and followers, who flooded his timeline on Thursday, expressed shock at the news of his death as they paid tributes to his memory.

One Imeh Ebuh said, “As one of those I always look up to on Facebook, this is really a shock to me. I can only say rest in peace dear brother till we all meet to part no more. Whoever did this to you shall know no peace. Karma shall locate his address and do justice on your behalf.”

“An end unforeseen of a political stormy petrel and cerebral social commentator; an untimely departure too painful to comprehend; it is night in the morning as the sun refuses to rise. Rest on Okon,” another friend, Philip Umoren, wrote.

He said, “We cannot say categorically whether it is assassination or robbery, but based on the information at our disposal it looks like an assassination.

“We have a clue which we are working on and very soon we will get the assailants arrested.

“This type of crime cannot happen in Ogun State without us unravelling those behind it and this case will not be an exception. Already, we have some suspects we are interrogating and we have some clues we are working on. Very soon, we will get those people.”