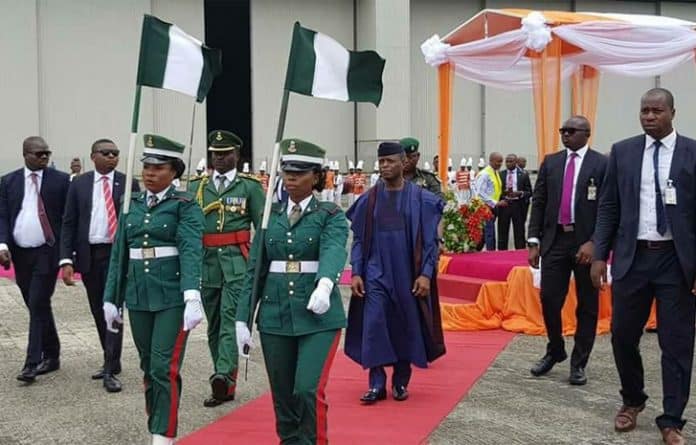 The Vice President was received at the airport by the state governo, Godwin Obaseki, top government officials and leaders of the All Progressives Congress (APC). when he landed at the airport at exactly 2:29pm.

The Vice President’s during is visit, will inaugurate some projects in the state.

The state cultural troupe was also at the airport to welcome the vice president to the state Capital.

Osinbajo who,  was also welcomed by the state cultural troupe already has been to daiken Market at Iselin, to  inaugurate a pilot phase of a solar power project under the Energizing Economy Programme of the Federal Government.

He would also inaugurate the Benin Technical Innovation Hub that is expected to host over 25 ICT companies geared towards training young and old people on various ICT-based skills.

The report says that Osinbajo two-day visit would also see him perform the foundation laying ceremony for the construction of 1800 housing units.

The housing unit is a joint venture project of the government of Edo and a private sector organisation.

Osinbajo would also visit the 480 mega watts Edo-Azura power project and also attend a town-hall meeting with beneficiaries of the Social Investment Programme (SIP) of the Federal Government.

The vice president would also meet with the Micro, Small and Medium Enterprises (MSMEs) community in the state, as part of the Federal Government’s efforts at deepening the sector to boost economic growth.

Meanwhile, the news agency reports that the airport and the road leading to the city were adorned with posters and banners, welcoming the vice president.