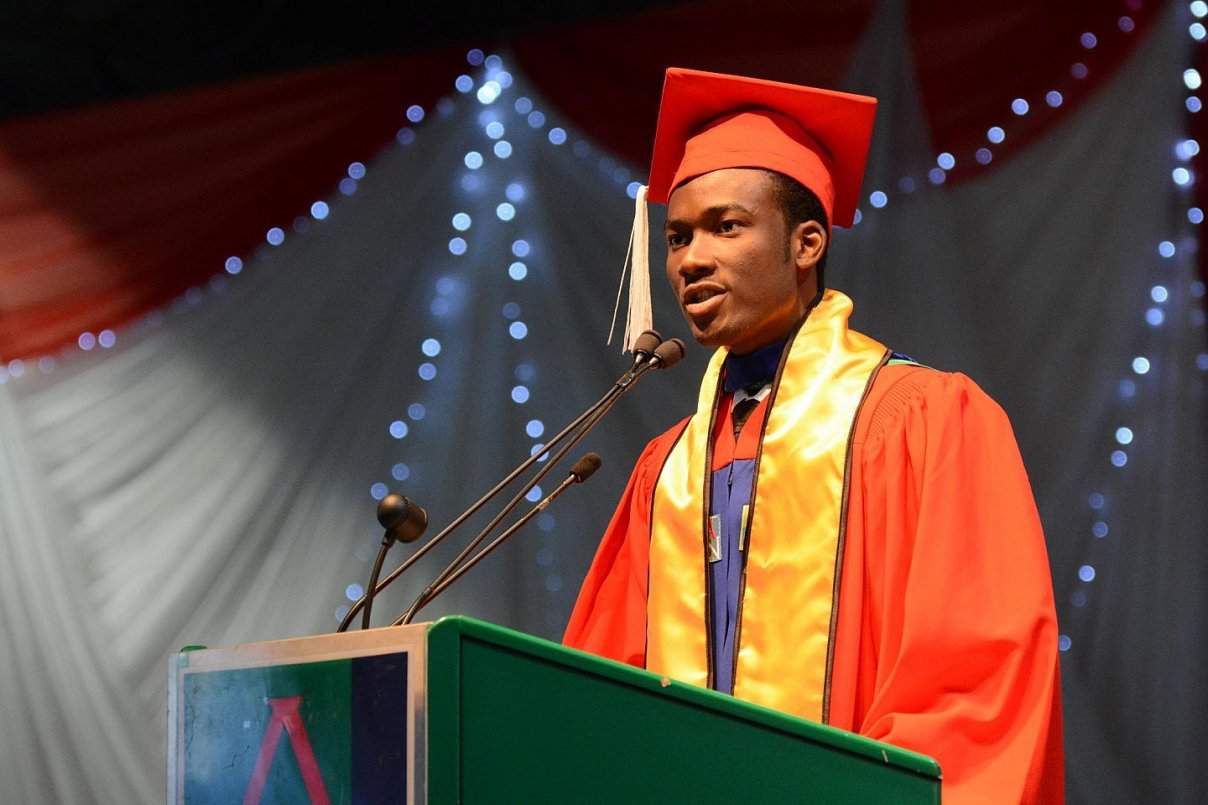 Parents beamed with smiles and laughter as Benedict Egwuchukwu (Jnr), who had bagged five awards on the valedictory night and shook hands with Atiku Abubakar, a former vice president of Nigeria and founder the American University of Nigeria in Yola of Adamawa State.

In the previous year one Immaculata Onuigbo, from Enugu State, scored the highest ever score in the university’s history – 3.98 – to emerge the class valedictorian.

Premium times reports that the valedictorian’s mother, Bridget, graduated from the Rivers State University of Science and Technology in 1987 with a First Class degree in Biochemistry; the next placed student after her bagged a Second Class Lower. It took one decade for another First Class student to emerge from that department.
“My son took after his mother but without much dilution,” said Mr Egwuchukwu,  father of the Valedictorian and a petroleum engineer.

“If there was much dilution he wouldn’t have gotten that (the valedictorian), it was because I had a superior addition to her gene so we made it a super.”

Similarly, amidst laughter and smiles, Valedictorian’s mother said her son “wasn’t very bright in his primary and secondary school” days.

“He wasn’t even first 10, but I wasn’t also bright in my primary and secondary. And I told all of them (her children) ‘It doesn’t matter. All I need you to do is to do your best. Just put in your best, that is all I want from you. When the time is right it will mature.’

“The same thing happened to me, I wasn’t too good in primary school. In my secondary school, I was above average, and in my university, I had first class.”

Benedict said he was surprised to emerge the university’s valedictorian for 2018.

“To be honest, it’s quite overwhelming I didn’t want to believe it at first but here I am,” he said after it was announced last Friday night.

“All I can just say is that I thank God because looking back at my academic history from primary and secondary schools I will not believe I will be here today, I just give God the glory, it’s really overwhelming for me.

“In primary school I was a bit average, in secondary school I really didn’t take my academics too serious until in my SS (Senior Secondary) One, third term, that was when I finally got up to average, and from then on I started picking up on my academics but I still consider myself as an average student back then.”

Out of the 158 students who received their graduate and masters degrees and post-graduate diplomas at the university, 26 were honoured for their academic excellence.

While delivering the valedictorian speech on Saturday, Benedict said he was frightened after receiving an email a fortnight ago informing him he had been shortlisted among the best graduating students.

Benedict had  arrived at AUN in 2014 after a failed attempt to study in Canada.

His mother said he found it difficult to adapt to the weather in the North American country.

“We had to bring him back,” she said.

“I looked around the country, I wanted something that is as close as possible to what is outside the country and AUN, for me, was it. I spoke to the president (of the university) one-on-one and she assured me that security is paramount to them here.”

In his second year at the university, Benedict said he decided to shake off the ‘Bookworm’ tag that was beginning to be associated with him.

He said he wished he had begun his participation in extra-curricular activities much earlier than he did.

“If I was to start all over again what I would have done differently is that I would have loved to have engaged in more activities from the beginning because in as much as academics is important, relationship with people and communication is very important,” he said.

“I wish I had started earlier, that’s one thing I believe I should have done better.”

Despite starting extra-curricular activities late, Benedict went on to become the Assistant Director of Finance in the Student Government Association, Vice President of the Non-denominational Christian Fellowship, and member of the AUN Football Association. He was also a member of the AUN Honour Society and graduated as an ambassador of the Emerging Leaders Academy.

Mr Egwuchukwu said even though he wasn’t sure his “boy” would make a First Class based on his previous academic records, he never envisaged it getting to “the extent of collecting uncollectables.”

The trajectory his development took after a few years at the university made him suspect something was brewing in his son.

“And he did it better than I was doing, in fact, I told him to send me some of the materials he was using to do the prayer session. I was impressed.”

Both parents advised other parents who have kids who struggle in their early academic years to be patient with them saying ” you should know your child, from his academic records, especially if you are enlightened,”

“Don’t put down a child, no matter how low, encourage that child..”