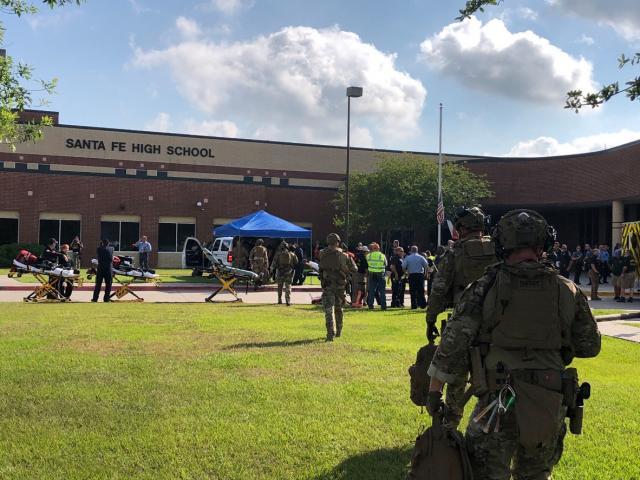 Shooting at a high school in Santa Fe, Texas, have led to the death of at least 8 persons on Friday, with one person in custody and a second detained, , a local sheriff said.

In a tweet, President Donald Trump disclosed the incident latest in a long series of deadly shootings at U.S. schools in recent years the situation was not looking good.

Florida, high school massacre in February that led to the death of seventeen teens and educators the nation’s long-running debate over gun ownership.

Harris County Sheriff Ed Gonzalez said that eight to 10 people, both students and adults, died in the incident at the school about 30 miles (48 km) southeast of Houston.

“There is one person, a suspect, in custody and a second possible person of interest that was detained and being questioned,” Gonzalez said at a news conference.

NAN reports that at least nine people were taken to area hospitals for treatment, hospital officials said. The conditions of those people was not immediately clear. Gonzalez said a police officer was also being treated for injuries.

“This is no longer an active shooting situation and the injured are being treated,” the sheriff’s department said on Twitter.

Dr. David Marshall, chief nursing officer at the University of Texas Medical Branch, said that the hospital was treating at least three patients – two adults and one person under 18. He said it was not immediately clear if that child was a student.

“I know that they have gunshot wounds but that’s the extent of the knowledge I have at this point,” Marshall told reporters at a news conference. “One adult is in our operating room.”

“We’re ready for more patients,” he said. “We have not heard of any enroute at this point.”