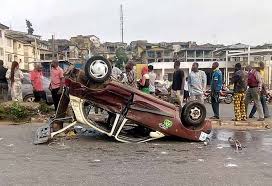 A woman has been killed while five others have been seriously injured in a road accident involving a Rover saloon car allegedly driven and occupied by “yahoo boys” rammed into a taxi at Coca-Cola bus stop, along Mokola-Sango road around 7am this morning.

Punch reports that the deceased has not been identified.

Eyewitnesses said the three occupiers of the Rover with number plate FGB 52 AA were drunk, adding that when they were rescued from the wrecked car, one of them had a broken hand while the other had bruised arm that was bleeding. The driver of the car had a minor injury and he was said to have fled the scene immediately.

“The car was coming from Sango end of the road. The driver was at a high speed and suddenly, the car somersaulted and flew over the median before hitting the taxi which was coming from Mokola end. We rescued the woman alive but medical help did not come on time as she died of her injuries at the scene. The boys were also rescued and from all indications, they were drunk. They were reeking of alcohol.

Information gathered also indicated that they just left one of the nightclubs on Awolowo Way, in Bodija,” noted an eyewitness who was just opening his shop when the accident occurred.

The passengers in the taxi were however not as lucky. The woman who died in the taxi was sitting at the back with two others who sustained serious injuries. The driver and another passenger in the front also sustained injuries.

The remains of the victims were being taken away by a van belonging to the Federal Road Safety Corps, while Policemen were also seen at the scene trying to maintain order and ensuring that an ensuing logjam was cleared.