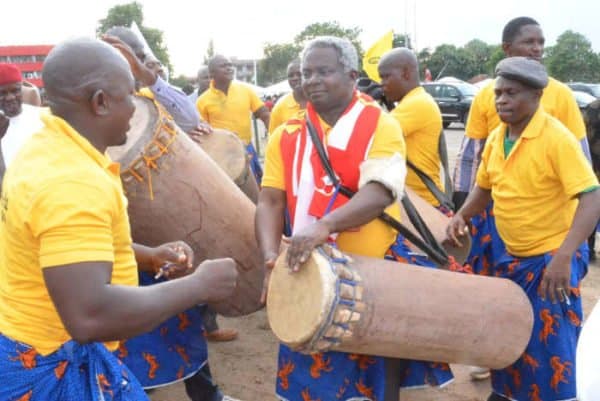 The third edition of African Drum Festival has began in in Abeokuta in Ogun state in South West Nigeria on Thursday, with 20 states, 40 African countries, Haiti, Brazil and Trinidad and Tobago participating.

Alhaji Lai Mohammed, The Minister of Information and Culture, who spoke at the event disclosed that Nigeria was planning to incorporate the African Drum Festival into the national calendar of festivals.

Muhammed, who represented President Muhammadu Buhari at the ceremony, noted that the festival had continued to grow better with each edition.

However, the festival was expanded in its second edition in 2017 to draw participants from other African and foreign countries.

The minister, who outline the economic advantages the Drum Festival would avail for the country, also pledged support of the federal government for the festival, saying that all national media platforms would be made available to create awareness for it.

“I will also appeal to the corporate world to partner with Ogun and support this festival by providing the much needed resources to ensure its sustainance.

“This festival is important to Africa because it provides us an avenue to showcase our rich cultural heritage as well as an opportunity to preserve the culture for the future heritage.’’

The Alaafin of Oyo, Oba Lamidi Adeyemi noted that drum serves as a veritable instrument of inspiration, mentoring and motivation particularly in the Yoruba culture.

The consultant to the Ogun government on the festival, Nobel Laurette, Prof. Wole Soyinka,  is expected to lead legends in a ” Drum Walk” from Kuto to the Olumo rock in Abeokuta, and also co-ordinate an international conference with the theme: “Drum for Advancement”.