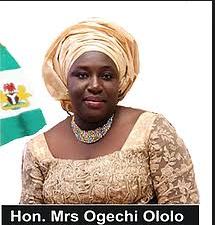 Commissioner for Happiness engages in twitter war with Nigerians

The recently sworn in Imo State Commissioner of Happiness, Mrs. Ogechi Ololo has been under fire not only because of her being Governor Rochas Okorocha’s sister, but for her the office she holds.

Ololo, who joined twitter this December,  took to twitter to defend her office, while also lashing out at critics.

The Commissioner had said:

I am truly surprised by the outbursts of young Nigerians on his excellency; Dr Rochas Okorocha. If you don’t understand something, keep quite, read and research. Make good use of your senses

I hope it won’t be claimed that the account was fabricated or hacked…behold the person that administers the affairs of happiness in IMO state…”quiet vs quite”!…and we are the ones that don’t read & research…without “sense” @jo7seph @julietkego

This statement is a display of your senselessness..if you where sensible enough, you wouldn’t even allow your brother create such an office late alone assume the office..You & your brother have made yourselves such laughing stocks..Watch out for the consequences!!!

Commissioner ma,you can’t spell quiet, you also don’t know that the first letters of His Excellency are always in block letters. You ma,have failed before getting started, L.

I believe its QUIET. Commissioner,did you go to school? You need to make good use of your own senses by editing your post first before sending. If not, then write in IGBO, that’s your native language. It still comes back to one thing. Sheer INCOMPETENCE.

Let me educate Nigerians on this, for those lacking ignorance. United Arab Emirates has ministers of happiness and they are ahead of us. Read https://t.co/tu9lJhqwau

So because you managed to read Wikipedia u think u know something?

However, the Commissioner, meant to make people happy insulted the users physical appearance.

I don’t blame you. I blame your bald head that no single strand of hair or sense has refused to grow from https://t.co/wI3nwEuC89

Nigerians are still reacting to Ololo’s assertions, some of which she has responded harshly to.