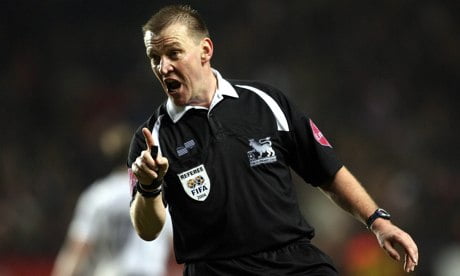 Mourinho was sent to the stands for the second time this month, during Manchester United’s 1-1 draw with West Ham at Old Trafford on Sunday.

The Portuguese angrily kicked a water bottle, after Pogba was booked for diving in the first half and referee Jonathan Moss sent him to the stands.

It is the second time this season that Mourinho has been sent to the stands at Old Trafford. He was also dismissed during last month’s 0-0 draw with Burnley. That time, it was for confronting referee Mark Clattenburg at half-time.

Mourinho was given a one-match touchline ban from the FA for his behaviour, after he accepted an improper conduct charge.

The former Chelsea boss was also fined £50,000 earlier this season for media comments he made about referee Anthony Taylor before United’s game at Liverpool.

Writing in his column for The Daily Mail, Poll said: “Jon Moss was absolutely right to send Jose Mourinho to the stands after another petulant outburst.

“The way Mourinho lost his temper, culminating in him booting a water bottle a long way down the touchline, is clear for all to see.
The fact that Moss was also correct in the decision which appeared to incense the United boss — cautioning Paul Pogba for simulation — is irrelevant as respect needs to be shown irrespective of the accuracy of decisions.

“United fans may well say that referees are treating their manager more harshly than others but for far too long his excesses were either ignored or tolerated.

“Referees have had enough of the clear lack of respect the Portuguese displays, none more so than Moss, who also dismissed him last season.

“So now referees are doing their jobs it’s time the FA did theirs. A six-game stadium ban might just do the trick.”