Nigerian columnist, Farooq Kperogi has reacted to a claim that Gregory Oseloka Obi, son of the presidential candidate of the Labour Party, Peter Obi, stepped on Nigeria’s flag.

A Twitter user identified as OfficialPigo had claimed that Obi’s son dressed in an IPOB t-shirt stood on the Nigeria flag.

The tweet reads, “In the pictures is Gregory Oseloka Obi, Mr Peter Obi’s son with IPOB clothes on, standing on the Nigeria national flag. We are watching.” 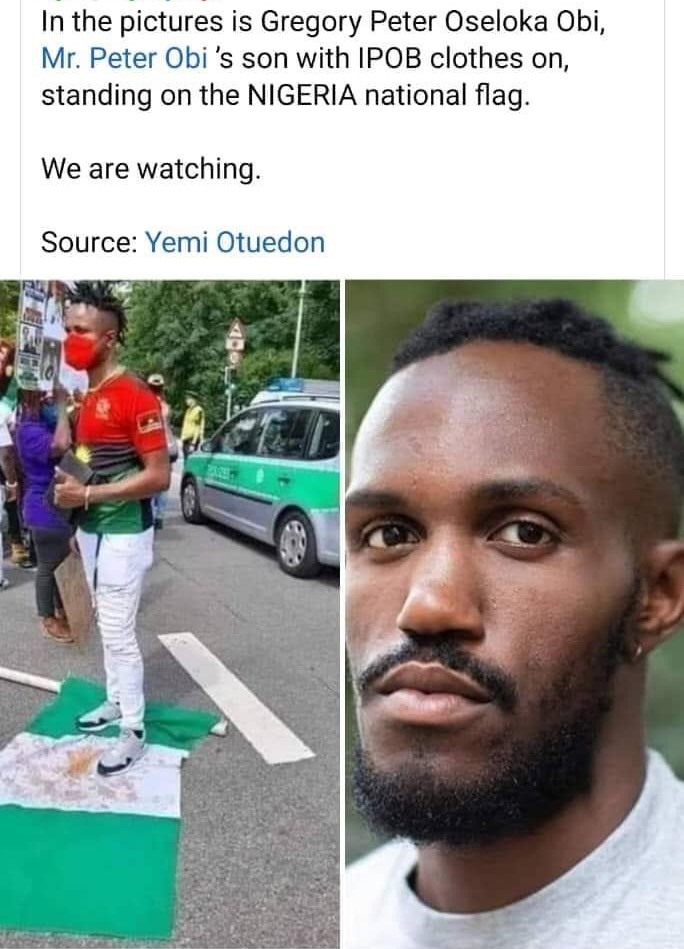 In a series of tweets via his Twitter handle on Monday, Kperogi described the claim as false adding that the accusations against Obi and his son are intolerably deplorable.

He claimed that some people who resent Obi’s rising national visibility and potential disruption are saying that an unidentified IPOB activist who stepped on the Nigerian flag is Obi’s son.

Kperogi advised those linking the LP candidate to the fake news to stop the propaganda and focus on their real issues ahead of the 2023 presidential elections.

He wrote: “This unidentified IPOB activist stepping on the Nigerian flag while robed in the colors of the Biafran flag is being falsely called Peter Obi’s son by people who resent Obi’s rising national visibility & potential disruption of the certainties of next year’s presidential election.

“How about puritan parents whose children are now libertines and sexual deviants? Or political liberals whose children are fire-eating conservatives and vice versa? All adults have a right to hold opinions that are independent of their parents & that transcend their upbringing.

“If Obi’s son isn’t already a father himself, he’s more than old enough to be one. It’s insulting to his intelligence & sense of self to attribute whatever opinions he holds to his dad If the choices—in this case, false choices—of a child is all you can invoke to question the motives of a parent, then you really have nothing on that parent.

“I’ve never read, seen, heard, or watched anything that even remotely suggests that Obi is any less patriotic than any other Nigerian. It’s legitimate to scrutinize Obi and his records — like we should do to all who aspire to be president—but making up false, scurrilous accusations against him and his son is just intolerably deplorable.“