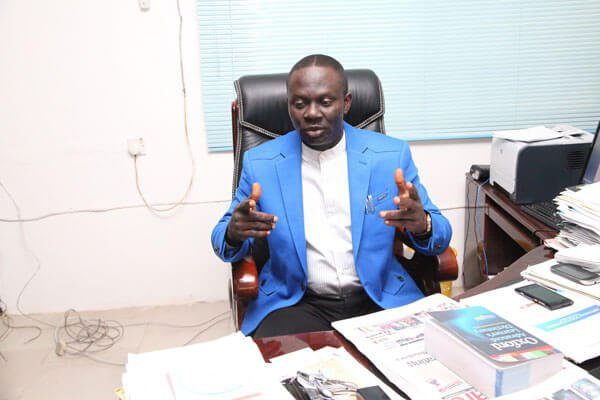 The Edo State chapter of the Peoples Democratic Party (PDP) has said Prince Kassim Afegbua, a former Presidential Campaign spokesman of the party, has long been expelled from the party.

The PDP stated that Afegbua, a former Edo State Commissioner for Information under the administration of ex-Governor Adams Oshiomole, is no longer a bonafide member of the PDP in the state.

Recall that Afegbua had recently announced that he was quitting the PDP following the emergence of Atiku Abubakar as its presidential candidate and the failure of Governor Nyesom Wike of Rivers State to grab the party’s vice-presidential ticket.

In a statement, the Edo state Publicity Secretary of the PDP, Ogie Aigbe Vasco, said Kassim Afegbua was expelled from the party for anti-party activities.

He said, “The Edo State Chapter of the PDP wishes to notify its members, supporters and critical stakeholders that Prince Kassim Afegbua, a former Presidential Campaign spokesman of our dear party, has long ceased to be a bonafide member of the PDP in Edo State.

“Our attention has been drawn to the numerous media showmanship being put up by a former member of the PDP family in Edo State, Prince Kassim Afegbua in the past few days. Though it is his right as a Nigerian to air his opinions on issues affecting the PDP, but he should not do so with the carriage and comportment of a registered and bonafide member of the PDP.”

According to him, “For the records, we bring to the attention of all that for anti-party activities, the Edo State Chapter of the PDP suspended him from party activities for one month on the 3rd of August, 2020. This suspension followed a recommendation from the executive of his Ward 5 in Etsako East Local Government Area.

“He persisted in his anti-party activities into the gubernatorial election in 2020. Subsequently, a six-man Disciplinary Committee was set up to investigate the allegations against him.”

Vasco further noted that “The committee’s recommendations in the report submitted in May 2021 are reproduced below:

“That Kassim Afegbua has displayed gross disobedience to party rules and regulations as contained in PDP Constitution in Chapter 10 Section 58(1) b, c, f, I, m.

“That until Kassim Afegbua appears before the various Disciplinary Committees, he is hereby expelled from PDP in accordance with Chapter 10, Section 59 (1) (g).”

“Following from the above, we reiterate Prince Kassim Afegbua’s expulsion from the party. He is not a member of the PDP Edo State family and should stop deceiving himself to be one.”