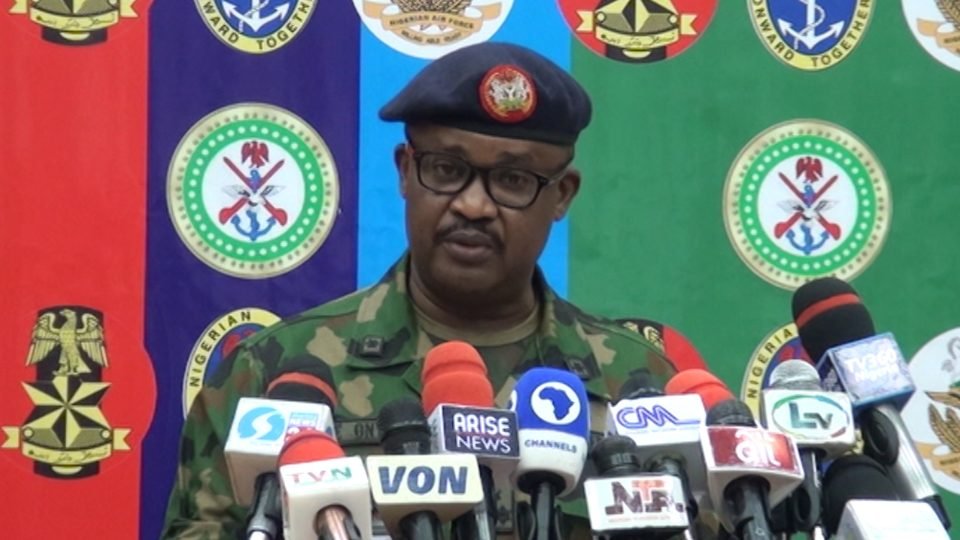 The Defence Headquarters has said that the country’s military remains loyal and committed to the Muhammadu Buhari government.

Naija News reports that the DHQ is reacting to a rumour that the Nigerian military was planning to overthrow the Buhari administration.

In a statement on Sunday by Acting Director, Directorate of Defence, Media Operations, Brig-Gen Bernard Onyeuko, the armed forces denied the rumour, describing it as false and baseless.

Onyeuko also refuted claims that the DHQ had warned soldiers against overthrowing the current government, saying that the statement did not emanate from his office.

He pointed out that the military does not need to warn the soldiers because their loyalty to the constitution and the president was never in doubt.

The DHQ, however, warned rumour mongers and mischief makers to desist from dragging the military into partisanship and tarnishing the image of the military.

Onyeuko added the military would deal decisively with any individual or group of persons out to cause confusion in the country.

He said, “The attention of the Defence Headquarters has been drawn to a misleading publication by an online newspaper, Naija News House, on Nigeria military warning politicians and officers against a coup which is credited to

“The publication is a handiwork of mischief makers and enemies of the state. It is a deliberate and calculated attempt to mislead the general public aimed at causing disharmony in the polity.

“The online newspaper manipulated with the intent of disinformation a previous message released in May 2021 by the then Director Defence Information, who is the current Army spokesperson. It is a malicious attempt to bring the military to disrepute. It is obvious that the online newspaper has its own sinister intention to cause confusion.

“The military high command hereby warns all mischief-makers and their proxies not to draw the military into their engagements. The Armed Forces of Nigeria remains apolitical and would not hesitate to deal decisively with any person or group of persons that want to tarnish its image or draw it into partisan politics.

“The Armed Forces of Nigeria remains loyal to President, Commander-in-Chief of the Armed Forces, President Muhammadu Buhari, GCFR, and also sworn to defend our democracy as well the Constitution of the Federal Republic of Nigeria.”

“In any case, officers and soldiers of the Nigerian Army do not need to be ‘warned against overthrowing Buhari’s government’ as their loyalty to the Constitution of the Federal Republic of Nigeria and to the Commander-in-Chief of the Armed Forces has never been in doubt. The Nigerian Army is a reputable national and patriotic institution that has fully subordinated itself to civil authority, having stood unwaveringly in defence of the nation’s democracy.

“The Nigerian Army will continue to be steadfast in defending Nigeria’s constitution and the much-cherished democracy by providing aid to the civil authority, whenever it is called upon to so do.

“It contended that the said publication, which was riddled with outrageous lies and fabrications claimed that the “Defence Headquarters had denounced a call for the military to take over the reins of power. The online outlet went further to attribute its falsehood to Army Spokesman, Brig-Gen Onyema Nwachukwu.

“The only reason why this grossly unprofessional and blatantly irresponsible report is receiving any attention is the attribution of the false statement to the Director, Army Public Relations, Brig-Gen Onyema Nwachukwu. The authors of the story must be the only news reporters, who do not know that Army Spokesman does not speak for the Defence Headquarters.

“However, for the sake of clarity and to keep the records straight, we wish to state that at no time did the Director, Army Public Relations, Brig-Gen Onyema Nwachukwu issue any statement on the subject matter. It is, therefore, a figment of their imagination, which did not in anyway emanate from Brig Gen Nwachukwu.”