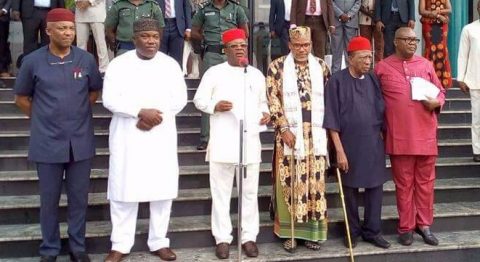 The co-convener of Concerned Nigerians advocacy group, Deji Adeyanju, has criticised Igbo leaders for failing to speak up against the arrest of Nnamdi Kanu.

He was then arraigned before Justice Binta Nyako who ordered his remand in the custody of the DSS till July 26th.

According to his lawyer, Ifeanyi Ejiofor, the IPOB leader was subjected to torture by the secret police and is currently suffering from a heart-related disease.

In a series of posts on his Twitter page on Saturday, Adeyanju described Igbo leaders as cowards for abandoning Kanu and not defending him.

He wrote: “Igbo leaders so afraid to speak up on the Nnamdi Kanu issue. Almost the entire North still standing with killer herdsmen.

“Only Abaribe, Ortom & Wike have spoken up.”

He also argued that Kanu should be released on bail if the federal government cannot arrest killer herdsmen and controversial Islamic cleric, Sheik Ahmad Gumi.

“If Gumi, all the killer herdsmen are roaming the streets free, then Nnamdi Kanu should be released on bail to attend his trial from home.”

“The Court can even restrict him to Abuja this time around,” he added.