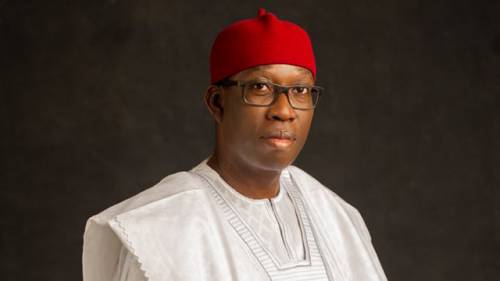 Governor Ifeanyi Okowa has said that he would not be distracted by attempts by some politicians to pitch him against his predecessors.

He made this known on Thursday while receiving hundreds of members of the All Progressives Congress (APC) in Aniocha/Oshimili Federal Constituency, who defected to the Peoples Democratic Party (PDP).

Okowa said all governors who ruled the state since 1999 performed very well, adding that the attempts by some persons in the state to put him on a collision course with past leaders of the state would not work.

The governor noted that he was focused on developing Delta according to the mandate freely given to him by the people of the state.

He remarked that PDP as a political party believed that power belonged to God and that the people reserved the right to make their choice.

He said: “We are a party that believes that power belongs to God and that’s why we are rejoicing.

“We also believe that power belongs to the people and that the people reserve the right to make their choice.

“Sometime ago, I said that power belongs to God and that only God will determine who will succeed me. I wonder why some people are angry about that statement because truly, only God knows who will take over from me.

“We are one family in the PDP and those who don’t have our character are angry because we always say the truth and they are trying all means to scatter our PDP family, but they will always fail because we have bonded very well together as a party.

“We will not work to put money in one person’s pocket, because a day will come when I will expose those of them that are angry with us.’

“If anyone says he is not seeing what we are doing, it’s either that they are blind or they don’t live in Asaba.

“I am building on the foundation that I met. Some people are angry and want to cause quarrel between me and my predecessors but they have failed because no stranger will deceive us in this state,’ he said.

He commended the people for their support over the years, adding that the coming of the defectors from APC would further strengthen the PDP in the state.