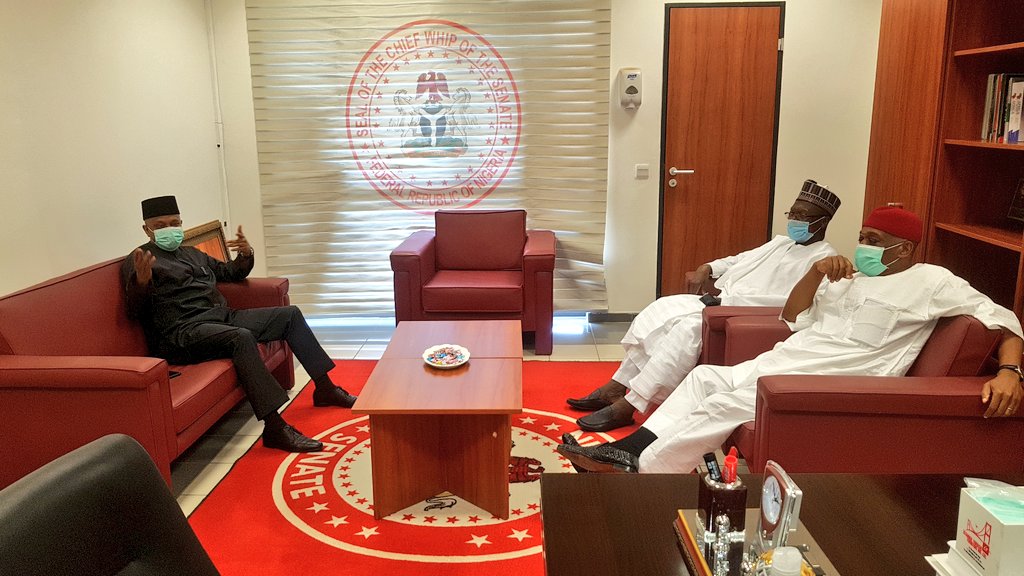 The Senate Caucus of the All Progressives Congress (APC) has rejected the claim of the Minority Caucus of the National Assembly that President Muhammadu Buhari has been absent in securing the country.

Naija News reports that the Minority Caucus had at a news briefing on Tuesday, addressed by the Senate Minority Leader, Senator Enyinnaya Abaribe, accused the APC-led Federal Government of alleged constitutional breaches.

Reacting to the allegations, Senate leader, Senator Yahaya Abdullahi, said President Buhari is not absent from duty but in charge and working to overcome the myriad of challenges confronting the country.

Speaking at a news briefing after a meeting of APC senators in Abuja on Wednesday, Abdullahi dissociated the APC Caucus from “all and any inflammatory statements that appear to threaten the authority of the President and our party”.

The Senate leader noted that the APC lawmakers insisted that engaging in blame game and threats of invoking “constitutional measures” is “unwelcome”.

Abdullahi, who was flanked by his deputy, Senator Ajayi Boroffice, Chief Whip of the Senate, Senator Orji Uzor Kalu, and Deputy Chief Whip, Senator Aliyu Sabi Abdullahi, accused the PDP of playing with the lives of Nigerians.

He said: “We in the APC Caucus of the NASS (Senate) received and wish to respond to the press statement issued by our distinguished colleagues in the Minority Caucus as read by the Senate Minority Leader.

“We in the APC Caucus totally reject the many incorrect statements contained in the said press release.

“Indeed, we are quite aware of the role of the opposition in any democracy. However, the statement by the PDP Caucus has gone too far given the good working relationship in the 9th Assembly and especially with the Minority Caucus.

“In any democracy, the rights to present criticisms and concerns on the state of the nation’s affairs are unassailable.

“However, while we respect such rights; which come with obligation and responsibility, we are concerned that the statement issued by the Minority Caucus is capable of over-heating an already charged polity in which men of good conscience and patriotism are expected to act as leaders and statesmen.

“While we acknowledge the natural disposition of playing politics, we are worried and disturbed that our colleagues are playing with lives.

“The unfortunate state of insecurity; for which the Senate has continuously debated and issued resolutions to support the actions of the executive under the leadership of President Muhammadu Buhari in the overriding interest of the public, is too delicate to play with.

“In all our deliberations, the entire Senate, including the minority, had discussed exhaustively in a very robust, transparent and patriotic flavour to arrive at our concrete resolutions.

“A case in point is the current invitation to engage the service chiefs. Furthermore, we take exception to the unfortunate charge that our President has not been seen.

“This is false and cheap politics. Mr. President and Service Chiefs are meticulously busy every day and every night in deliberations with a view to addressing the security challenges across the entire country.

“Similarly, Mr. President had always made statement to Nigerians on all major security incidences and assuring Nigerians and indeed the international community that he would continue to do his best in making sure that the security challenges are tackled head-on.”