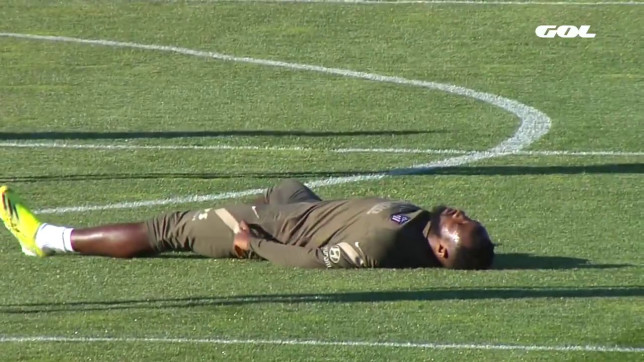 French International who plays as a striker for Spanish club Atlético Madrid on loan from Lyon, Moussa Dembele, seized breathe for a moment on Tuesday, March 23 during a training session.

Naija News understands that there was a disruption during the club’s training session on Tuesday evening, March 23 when the 24-year-old player collapsed and fainted.

Dembele as seen in the viral video shared on the internet, lose consciousness while training with his fellow team players. The was filmed stretching out his hamstrings before falling on his back and lying motionless on the pitch.

Shocked with the development, Dembele’s team-mates and training officials quickly rushed and assisted the striker while other Atletico’s medical staff showed up for urgent medical attention.

Naija News understands that several minutes were spent on the pitch as the club’s medical team try to resuscitate the player, while his teammate ran to the pitch-side ambulance to get a stretcher.

A subsequent report, however, confirmed that Dembele regained consciousness. Medical tests carried out on the player, however, stated that there is no ‘serious’ issue with the player, noting that the incident was caused by low blood pressure.

The player will continue to be monitored by the club’s medical staff and will remain under close supervision following the incident.

See below the moment Dembele collapse during the training session.

Imenger was the manager of the Nigeria Professional Football League (NPFL) club, Lobi Stars, before his death.