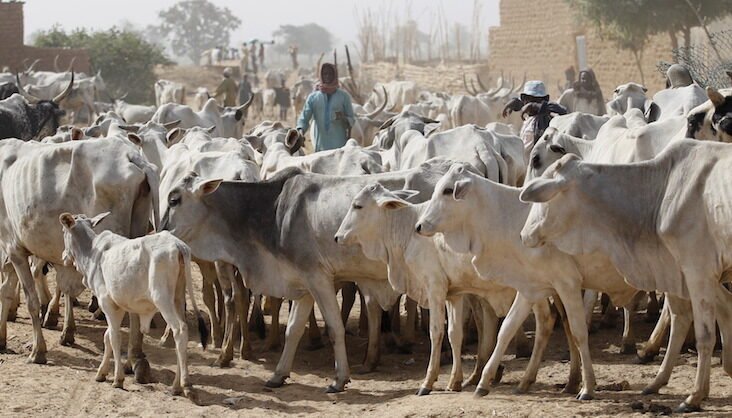 File Photo: An existing photo of Fulani herders and their cows

Men of the Western Nigeria Security Network codenamed Operation Amotekun, in Ondo State reportedly seized no fewer than one hundred cows from Fulani herders for violating the open grazing law in the state.

Naija News learnt that the Amotekun corps apprehended the herders and seized that flocks following a distress call received at the command that cows barricated the Ilesa-Akure expressway and as well invaded farmlands and destroyed crops.

Confirming the development, Adetunji Adeleye, the state Amotekun commander, told newsmen that upon learning of the development, operatives of the agency were dispatched to clear the area, during which the cattle and their herders were apprehended.

He said: “The state government came up with a law banning open grazing, night grazing and banning grazing on the expressways. We got a distress call that cows blocked Ilesa-Akure expressway and also entered farmlands and destroyed them, so we moved in and were able to apprehend them,”

Adeleye, however, said that the cows would be released once the herders sign an undertaking not to flout the open grazing law again.

He added: “They’ve been arrested and are now talking to the owners of the farmland. Once they write an undertaking not to destroy farmlands again and they have a way of repairing what they destroyed, we’ll release the cows to them.”

Meanwhile, nineteen people were killed in a tragic car accident on the Kaduna-Abuja highway on Sunday.

Naija News reports that the incident took place on Sunday evening near the town of Katari.