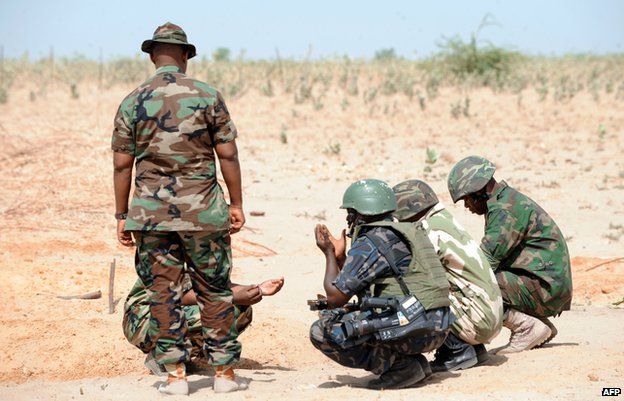 File Image: An existing photo of men of the Nigerian Army

A newly recruited soldier has reportedly killed himself for a reason only known to him.

Reports reaching Naija News confirmed that the gallant soldier of the Nigerian Army, whose name is identified as Bello Useni, shot himself dead while at his duty post at the Obienu barracks in Bauchi State.

Useni who was said to be one of the new intakes in 2020, while gisting as usual with colleagues reportedly cocked his rifle and shot himself in the stomach.

Naija News understands that the incident happened around 4 pm on Wednesday, March 3.

Confirming the incident, a source told newsmen that Useni “was on duty alongside his colleagues. They were all discussing normal soldier things and suddenly, he pulled out his gun and shot himself in the stomach.”

“In fact, we couldn’t even rush him to the hospital as he died on the spot,” the source added.

TheCable reports that the deceased’s body has been deposited at the mortuary in Abubakar Tafawa Balewa Teaching Hospital (ATBU), Bauchi. Further reports revealed that Useni’s colleagues who were with him at the time of the incident, have been locked in the guardroom, pending investigation.

Naija News learnt that the incident has been communicated to the army headquarters, and a board had been set up in the barracks to investigate the matter.

Efforts to get a comment from the Army spokesman, Mohammed Yerima, proof abortive as he was not available at the time the report was given.

Meanwhile, Military sources have revealed that the Federal Government declared Zamfara State as a ‘no-fly zone’ to cut the supply of arms and ammunition to bandits and other criminals in the state, Naija News reports.