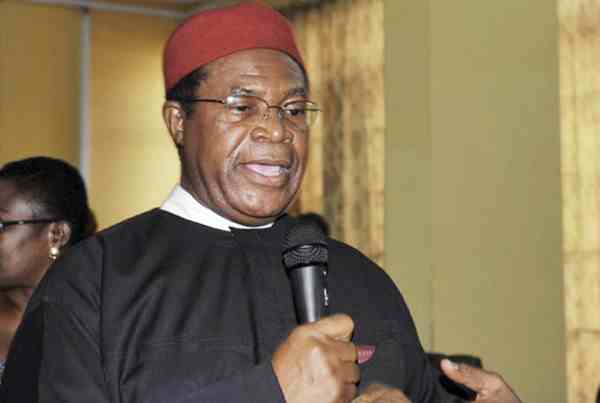 A former governor of Enugu State and chairman of the Peoples Democratic Party (PDP), Okwesilieze Nwodo, has blamed southern leaders for the food blockade in the north.

In a statement on Wednesday, Nwodo stated that the starvation the South faced during the Biafra war should have served as a wake-up call for the leaders to take agriculture seriously.

The former governor warned that nobody is gaining from the call by the Miyetti Allah Cattle Breeders Association of Nigeria (MACBAN) to block the supply of foodstuffs to the South.

The ex-PDP chairman urged leaders in the south to invest in agriculture to guarantee food security for the people.

Nwodo said: “The wakeup call for the Southern Nigeria to embrace agriculture came more than 60 years ago. The starvation we faced during Biafra war is enough to make us take agriculture seriously. We should not depend on anybody to feed us because we have enough arable farmlands.

“When I was the governor, my primary focus was agriculture. The mantra of my government was to create new wealth through agriculture; an industry that can employ more than 70% of the adult population.

“When Michael Opkara was the governor of the old Eastern region, it was the money from cashew, palm produce, and other agricultural engagements that he used to build the University of Nigeria, Nsukka, UNN, Eastern Television Station and some roads in the region. We were the fastest growing economy in the world at a time because we embraced agriculture. I knew that and I wanted to make Enugu State, not just the foodbasket of Nigeria but of West Africa.

“Because our blueprint was so awesome, the World Bank approved to give us loan even though the Federal Government stopped states from borrowing because of the loan portfolio at that time. We had the irrigation farm at Ette in Igbo-Eze North Local Government Area of the present Enugu State and Ishienu in today’s Ebonyi State.

“By the time I left office, we had cleared over 31 large portions of land donated by communities who wanted to participate in agriculture. However, since then, no government has touched that document. It was only the former governor of Ebonyi State, Sam Egwu who did good work in agriculture which the present government is sustaining by producing the best rice in Nigeria now. The first rice farm in Nigeria, the Adarice in Enugu State is rotting away as we speak.

“The truth is that the governments of the Southern Nigeria are not serious about agriculture, otherwise, we shouldn’t be held to ransom by the North refusing to shift foodstuffs and other agricultural produce to us. We should have been self-sufficient and even exporting our products.

“The land is there and we should even be producing more than the North because we have more rainfall than them. In Enugu’s blueprint for agriculture, we have proposal for irrigation farming and had imported all the equipment to make it possible for all-year farming. I don’t see any state that is serious in agriculture in South East. Anambra and Ebonyi States are trying , but we can do more not to be held to ransom by whatever is happening at Northern Nigeria.

“The first irrigation farm we built at Ette, in Enugu State where we had bountiful harvests, is now allegedly being inhabited by herdsmen. The villagers cannot even go there anymore for the fear of the unknown. No government has gone there to consolidate on what we built. The place is now being covered by bushes.

“In Adani, Uzo-Uwani Local Government Area of Enugu State, Michael Opkara did 30,000 hectares of farm and called it the Adarice. He got the Israelites to irrigate it. By the time I came in, I rehabilitated 10,000 hectares. That’s what the farmers are still using till date. The other 20,000 hectares are still unused.”