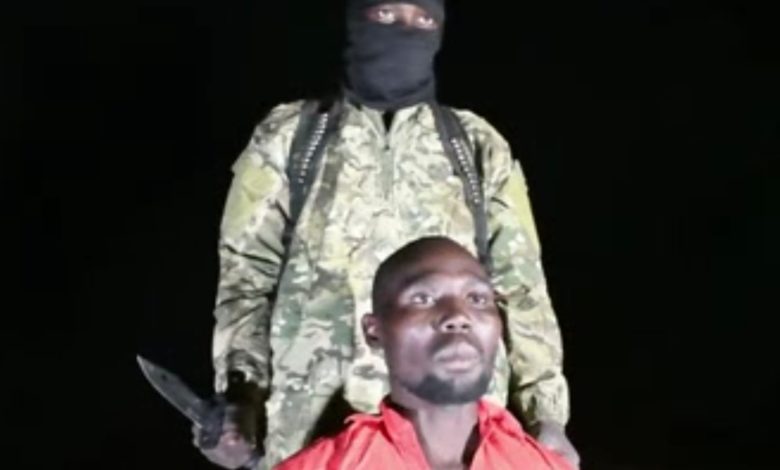 The Boko Haram terrorist group has issued a 7-day ultimatum for the government to meet its demands or kill a pastor, Bulus Yakuru whom they abducted in December 2020.

The pastor was said to have been abducted when the insurgents attacked Pemi village, close to Chibok on the eve of Christmas in 2020.

He has since being in their custody despite earlier appeals from him through videos released by the group in December 2020 and again in January 2021 for the government and the Christian Association of Nigeria (CAN) to come to his rescue.

His abduction has now taken a new turn with the ultimatum issued by the Boko Haram terrorists in a new video as contained in a report monitored by Naija News on HumAngle.

According to the report, the pastor appeared in the new video with a Boko Haram soldier holding a knife to his head as he begged President Muhammadu Buhari, the Borno State Governor, Professor Babagana Zulum, his Local Government Chairman, and the Christian Association of Nigeria (CAN) to urgently come to his rescue before he is killed.

It is understood that the deadline given by the terrorists will expire on Wednesday, 3rd March 2021.

An obviously distraught Yakubu in the video said: “I’m calling on President Muhammadu Buhari and the Governor of Borno to help me because I have been given a one-week ultimatum today, Feb. 24.”

“If you want me alive, I beg you in your capacity as President, the governor and our local government chairman to save me from this suffering.”

“I’m calling on the EYN Church of the Brethren President to intervene and secure my release. Please pray for me.”

“Today is the last day I will have the opportunity to call on you in your capacity as my parents and relatives in the country. Anyone who has the intention should help and save me. Please release me from this pain,” the pastor begged.

Meanwhile, the abducted driver of Adamawa United Football Club, Kabiru Mohammed, on Wednesday night was released by his abductors after spending five days in the kidnappers’ den.

Recall that Mohammed was abducted along Benin-Ore-Lagos road when the bus in which he was driving the players and officials of the football club was attacked by gunmen.

The Permanent Secretary of the Adamawa State Ministry of Youths and Sports, Aliyu Abubakar Jada, who confirmed the release, said the driver was in sound mind when he spoke with him on phone.